How To Design Your Audio Setup for TriCaster Mini, Part II

Welcome to Part II of this three-part series on designing your audio setup for TriCaster Mini, the powerhouse production system in a box that you can connect to virtually any set of HDMI cameras for live webcasting and/or live-to-disk recording.

In this three-part series, I cover:

On-Air lights are used to indicate that a live broadcast is taking place. Sometimes, they are configured only to illuminate when the studio microphones are “open” or active. In that case, they are often connected to the audio mixer, in order to be turned on and off automatically together with the microphones, as long as that feature is available on the audio mixer. More about that later in this article.

Audio monitor is the term used to describe the loudspeakers used to hear what’s happening in a program. They may be active (meaning that they have a built-in audio amplifier, so they can accept a line-level audio signal directly) or passive (meaning that they require an external power amplifier to raise a line level audio signal to speaker level).

Since this article is mainly about audio in a TV studio, when I refer to the word **monitor **in this article, I mean audio monitor, not video monitor.

In addition to the audio mixer internal to all TriCasters, audio mixers are physical devices manufactured by third-party companies that mix (combine) multiple external sound sources during a live show. For a TriCaster Mini, an external audio mixer is necessary if there is to be more than one microphone (unless you plan to connect microphones exclusively to the camera inputs, and do not plan to accept live phone calls from an analog telephone line). The audio mixer’s end product feeds the audio input of the TriCaster. When selecting an audio mixer, you should certainly be sure to take into account all of the microphones and other external sound sources you may be using today or in the near future. Typically, the number of microphone inputs available in a mixer is lower than the number of line-level inputs. But there’s much more to it than that, as you’ll see ahead.

Audio mixers are often classified as TV, radio, or production-class. Sometimes the first two (TV and radio) are grouped into a classification called “broadcast”. This really has nothing to do with the mixer’s sonic quality, but with a couple of special features that make them more practical for use in a live environment. What are those features?

Broadcast audio mixers marketed for radio can fortunately work perfectly for all but the most complex TV shows, and cost a fraction of those marketed for TV. 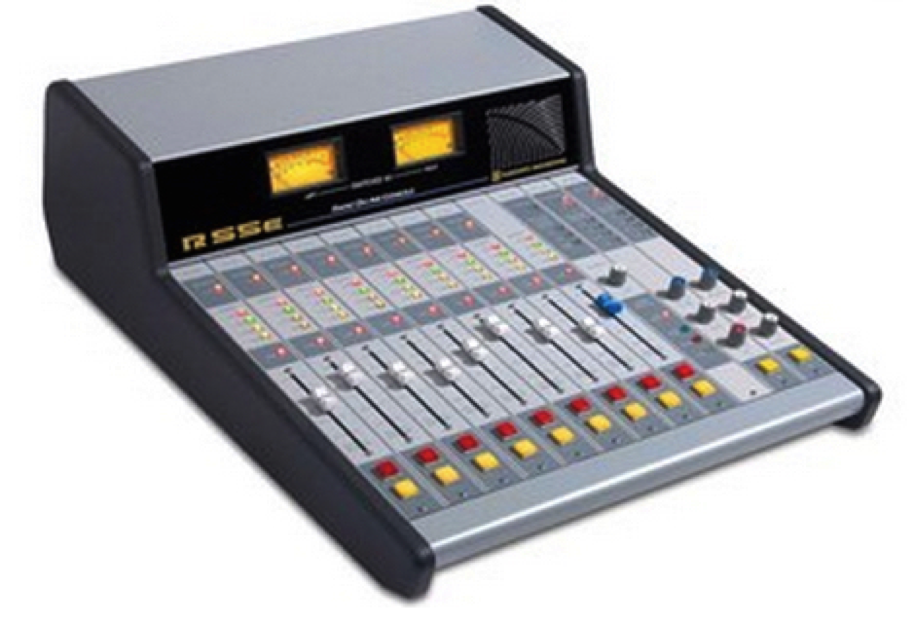 For example, an AudioArts R-55e-8 (shown above) with four microphone inputs costs less than US$5,155. 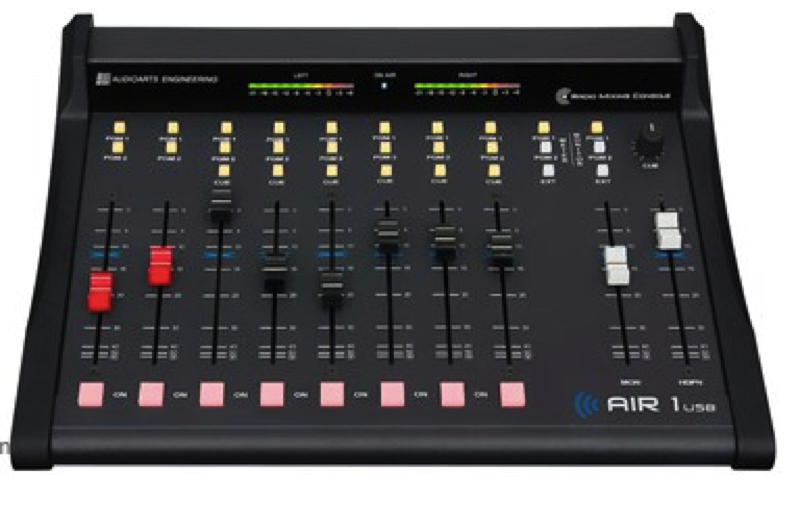 If you’re sure that your TV show can deal with only two microphone inputs, then the AudioArts Air 1 costs less than US$2,095. Both of the mixers mentioned so far fortunately cost a fraction of an audio mixer marketed for TV studios by AudioArts’ parent company, Wheatstone Corporation. Those companies have been supplying high-quality broadcast audio mixers for more than 35 years.

But what if you already own a production audio mixer (without muting or On-Air light capabilities), or have a lower budget and also need more microphone inputs? Fortunately, there is an inexpensive product on the market called a Mixer Buddy from Broadcast Tools, Inc. that adds both of those features to any production audio mixer, as long as it has a feature called Insert for each microphone input. (The Insert function was actually created for audio mixers for a different reason —to add audio processing equipment— but works great with the Buddy Mixer too.) 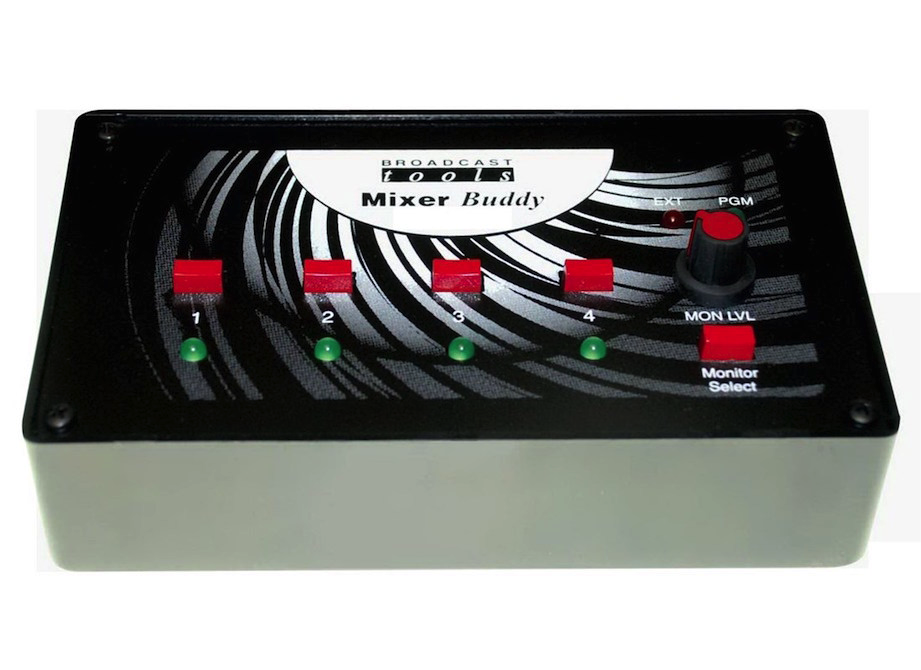 Fortunately, the Insert function is available with many production type audio mixers, including some very inexpensive and high-quality ones like the acclaimed 1402VLZ4 from Mackie. The Mixer Buddy works with up to four live microphones and costs less than US$169. The Mackie 1402VLZ4 could even handle more than four microphones, and costs less than US$520. The 1402VLZ4 also has several line inputs to connect non-microphone sources.

There is even a package offered by BSW (Broadcast Supply Worldwide, shown above) that includes the 1402VLZ4, Mixer Buddy, and all required interconnecting cables. That entire package currently sells for less than US$500.

As I indicated earlier in this article, the recommended wired microphones for a live TV show are balanced XLR. That’s why you’ll need balanced XLR cables to connect the microphones. 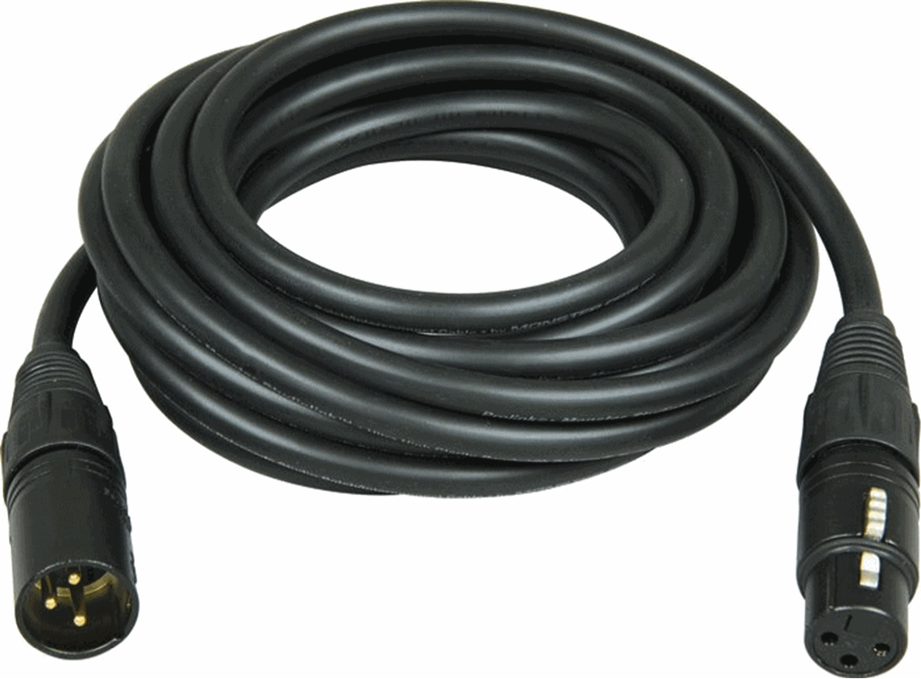 However, once you use multiple microphones (and potentially IFB feeds back to your on air talent), it becomes messy to have so many cables. That’s why someone thankfully invented the invaluable audio snake. 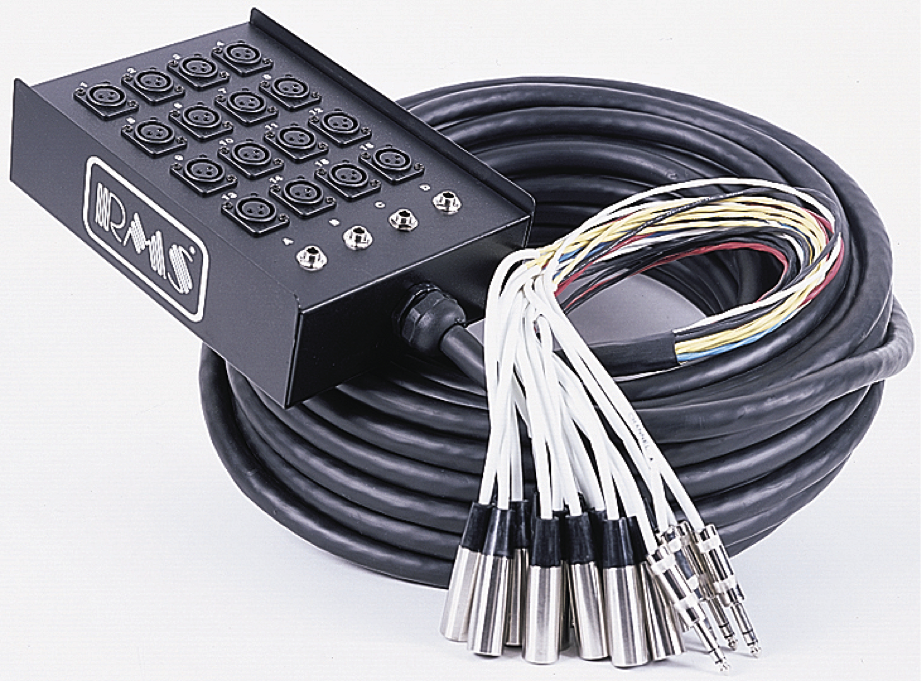 Audio snakes are available with varying number of XLR and return audio, which is typically 1/4” TRS. Above you’ll see an example of a typical snake for multiple balanced XLR plus returns for IFB. If you don’t need so many IFB signals as microphone sources, you could use one of the unused return connections for your studio monitors. Otherwise, you will need separate cables for the monitors, or you can purchase a larger snake with more send and receive connections.

Part I: How To Design Your Audio Setup for TriCaster Mini

Part III: How To Design Your Audio Setup for TriCaster Mini

Born in Connecticut, United States, Allan Tépper is a bilingual consultant, multi-title author, tech journalist, translator, and language activist who has been working with professional video since the early eighties. Since 1994, Tépper has been consulting both end-users and manufacturers through his Florida company. Via TecnoTur, Tépper has been giving video tech seminars in several South Florida’s universities and training centers, and in a half dozen Latin American countries, in their native language. Tépper has been a frequent radio/TV guest on several South Florida, Guatemalan, and Venezuelan radio and TV stations, and he currently conducts the CapicúaFM podcast. As a certified ATA (American Translators Association) translator, Tépper has translated and localized dozens of advertisements, catalogs, software, and technical manuals for the Spanish and Latin American markets. He has also written contracted white papers for manufacturers. Over the past 18 years, Tépper’s articles have been published or quoted in more than a dozen magazines, newspapers, and electronic media in Latin America. Since 2008, Allan Tépper’s articles have been published frequently –in English– in ProVideo Coalition magazine. More info at AllanTépper.com

NewTek sponsored this article after receiving Allan Tépper’s proposal. As of the publishing date of this article, Allan Tépper has had no commercial connection with AudioArts/Wheatstone Corporation, Audio Technica, Auralex, Broadcast Tools, Inc., Comrex, JK Audio, Mackie (LOUD Technologies Inc.), Primacoustic, QuietRock/PABCO Gypsum, RØDE, or SONEX other than that some of them have sent him units to review. The words and opinions of Allan Tépper expressed herein are his own.

How To Design Your Audio Setup for TriCaster Mini, Part I

How To Design Your Audio Setup for TriCaster Mini, Part III