Neumann University Connects Its Campus With TriCaster® and NDI®

Sean McDonald has the best job in the world, or at least that’s how he sees it. McDonald is Director of Media at Neumann University, just outside Philadelphia, and every day he introduces students to the world of media production armed with the latest technology.

“Seeing that ‘a-ha!’ moment in a student’s eyes is the thing that makes me want to keep doing what I’m doing,” McDonald says. “I have a lot of great tools to work with. I have a great studio space. I have a lot of great equipment, but without the students, it’s all just a bunch of toys. Working with my students and getting them to truly understand the technology, and work outside the box, drives me to continue to get better. It’s what makes me love coming to work every day.”

The Gem Atop The Holy Hill

Neumann University was founded in 1965 by the Sisters of Saint Francis of Philadelphia, and was originally intended as a training ground for Catholic nuns who wanted to become nurses or teachers. Since then, the school has morphed and grown into a residential and commuter university with almost 2,100 undergrads and over 600 students enrolled in graduate programs.

“We call Neumann University the gem atop the Holy Hill,” McDonald says. “The school is located on the highest point in Delaware County. We’re about 20 minutes south of Philadelphia, and when you walk onto our wooded, suburban campus, you feel like you’re somewhere really special.”

When McDonald joined the staff at Neumann ten years ago, the modestly equipped television studio facility was sitting empty six days a week. That changed once McDonald came on board. Neumann Media, a co-curricular organization open to any member of the student body, began to attract interest from students hungry to work in the empty studio and get their hands on the facility’s TriCaster Mini. Thanks to McDonald’s guiding force, Neumann Media eventually became the largest student organization on campus.

As Neumann grew, so did the school’s interest in digital media and video. In 2016, the University opened a new, $5,000,000 television and radio production center inside the university’s Thomas A. Bruder Student Life Center. That same year, Neumann launched its Communications and Digital Media undergraduate program. Students at Neumann are now preparing themselves for careers in digital media, learning on the latest equipment. And not surprisingly, NewTek TriCasters are still at the heart of the school state-of-the-art production facility.

“There are now five TriCasters in our arsenal,” McDonald tells me, “all interconnected with NDI, which really lets us be in five different locations at once. We can pull in live sources from anywhere on campus. We have two television studios that also serve as classrooms and as Master Control for our sporting events. Over at the Mirenda Center, our arena, we’re broadcasting with our TriCaster 8000 from at least five camera positions for all of our NCAA basketball broadcasts. We’re also connected to our theater, so we can pull in anything that’s happening there as far as presentations or performances are concerned. And it’s all easy to accomplish, thanks to NDI.”

As the school continues to grow, NDI-equipped TriCasters will remain an integral part of the university’s plans. “We’re in the process of building a new health sciences building,” McDonald tells me, “which will also have a TriCaster to make sure that events held anywhere on campus can be made available to be recorded or streamed.”

In addition to TriCasters, Neumann also makes extensive use of NewTek’s 3Play to generate replays in their sports broadcasts. They also use TalkShow, NewTek’s solution for adding live, full HD, distraction-free Microsoft Skype TX video interviews to productions, for their interview programs.

“We had the founder of the college radio foundation Skype us from Finland using TalkShow. We were able to do a simulcast with their foundation with no delay. The broadcast was flawless.”

In addition to NewTek’s NDI technology, Neumann University’s production crews are also making extensive use of Dante audio. “Dante audio has been a real godsend when it comes to workflow in our Communications Center,” McDonald says. “We’re using Dante within our video network to pass our IFB and audio sources to any studio, including our arena for intercom connections.

“We’re also using Dante to interact with our radio station. We’re pulling in live sources and remixing in real time, while we have bands performing on the radio station. We’re multi-track mixing, while broadcasting and filming, all at the same time, and we’re doing it flawlessly. It’s all so easy to make this stuff happen.”

“We want to make sure students are learning on the same equipment they will encounter out in the field,” McDonald says. “We’re trying to mimic the experience they might have working on an actual newscast or sports broadcast.”

To that end, Neumann hired a veteran broadcaster to teach their latest generation of up-and-coming broadcast professionals. Leigh Pullekines has over two decades of experience working in the television industry as a director at NBC-10 in Philadelphia. She became an adjunct instructor at the school, teaching video production classes, two years ago.

“I want to introduce students to the world of television,” Pullekines says. “Neumann has such an amazing facility, which is what drew me to accept a position teaching here in the first place. At NBC-10, I rarely feel like I’m making a difference in someone’s life, but here at Neumann, I feel that way every day.”

Pullekines says the school’s TriCaster is the perfect vehicle for teaching students, since it’s him both intuitive and powerful. “In our basic production forum, by the second class, the students are able to do simple interview shows, cutting between two cameras. Because of the simplicity and intuitive nature of the TriCaster, the students feel like they are able to do something right away. The fact that the TriCaster is Windows-based makes it much more comfortable for younger students. It’s much more intuitive, and the students aren’t intimidated.”

Ryan Bonacquisti agrees. Bonacquisti is a junior at Neumann, only 20 years old, but as one of the university’s designated directors, he’s been given the opportunity to call and switch multi-camera basketball broadcasts for the university, broadcasts that utilize at least five cameras, two on-camera announcers, and full replay capabilities (thanks to Neumann’s purchase of NewTek’s 3Play) that rival any NCAA basketball broadcasts anywhere.

“This is what I want to do in life,” Ryan tells me. “This is where I want to be. I’m 20, and I have the chance to do it right now. There’s no better feeling in the world. I’ve been on NCAA broadcasts; I’ve been on Neumann broadcasts. It’s an insane feeling to look back and say, ‘Wow, I’ve done all that. The things I’ve seen the TriCaster do in the few short years I’ve been here are just crazy. It’s so much deeper than it seems at first. When you realize that you can send signals for miles and miles, and connect broadcasts from all over the world, you begin to understand the possibilities that owning a TriCaster opens up. It goes so much further than just, ‘Take camera one, take camera two.”

Always Working on the Next Big Thing

As Neumann University’s digital media program grows, one thing is for certain. NewTek products will continue to figure prominently in any future expansion plans. Director of Neumann Media, Sean McDonald, feels like he’s been out ahead of the curve for years now. Since starting at Neumann, McDonald has watched the broadcast world begin to follow his lead, with many professional broadcast facilities buying TriCasters and other NDI-equipped technology. In fact, the local NBC affiliate in Philadelphia, where Leigh Pullekines is on staff, recently purchased a TriCaster for use on its remote productions. All of which fits neatly into Sean McDonald’s mission; training the next generation of video communicators. By equipping his production facilities with NewTek products, McDonald is confident that he’s training students to use the same gear they’ll encounter out in the real world after graduation.

“NewTek’s product line has grown exponentially in the ten years I’ve been at Neumann,” McDonald says. “Initially, the TriCaster was intended for a niche market. But over the last five years, I’ve seen the company grow, just like we’ve been growing. I’ve seen NewTek’s technology become more innovative and open to other vendors. They’re not just their own little contained area anymore, especially with NDI. So many of the vendor partners I use have begun adopting NDI technology. NewTek is continually on the cusp of innovation. All the products they continue to produce make workflow easier and more affordable for all different applications, from a small church to a major university, or even a broadcast television station. NewTek has a product for every price point. Wherever you’re at, budget-wise, you can be sure that you’re still getting the same great product line, the same quality, and the same customer service. And you know that the product line is always going to be upgraded within the next six months. You know that NewTek is always working on the next big thing, and every time NAB comes around, we all wait anxiously, because we know NewTek is going to be doing something pretty cool.

“We built our program, not just on the success of our students, but as a result of the state-of-the-art equipment we get to introduce students to. We are a small Catholic college outside of Philadelphia, and expensive production switchers and video equipment from other companies would cost us more than the buildings we’re constructing. Fortunately, we get the same quality out of NewTek products, for an excellent price that doesn’t break our budget every single year. So, without NewTek TriCasters and the other NewTek products we use, Neumann University wouldn’t have a video program, and we wouldn’t be able to attract students to be part of it.” 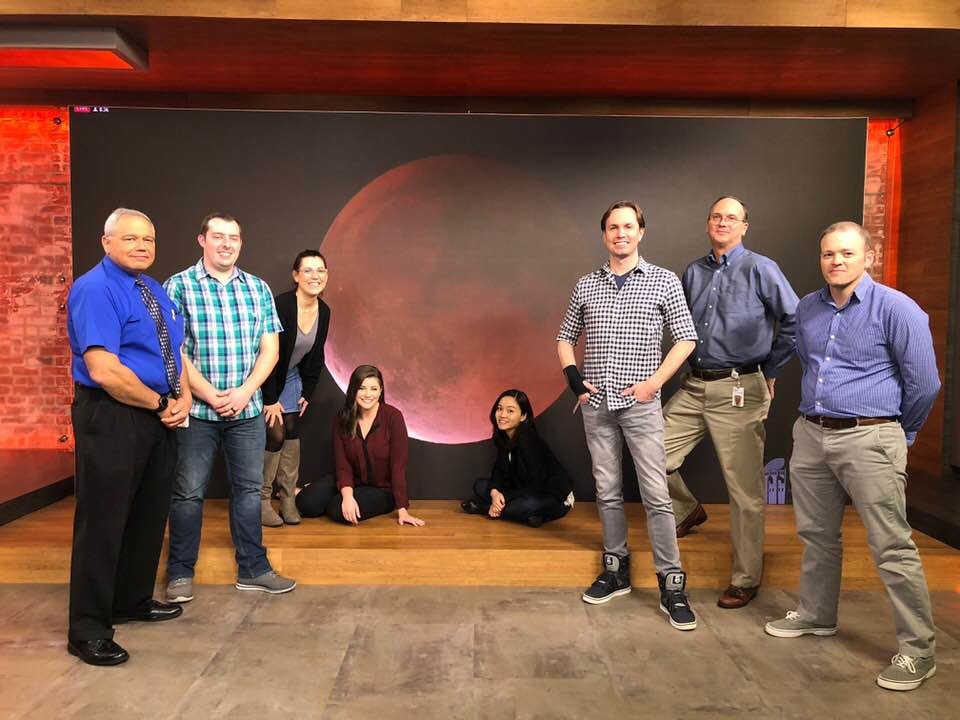 The All-New IP Production Studio at The Weather Company, an IBM Business