IP-based video production has implications far beyond the effect on traditional broadcast. The new technologies will change the face of AV as well, and that has major implications for media programs in Houses of Worship. Church Production Magazine explores this in an article by Alex Schwindt, Josiah Way and the CP Staff.

The article is a great summary of the current considerations for broadcast or media directors in the HoW segment. There are a couple of points we expand on here, and then we link you to the complete article.

They first outline the landscape of media in modern services. There is often a projection or display component used in services today even in modest congregations. In any size congregation this can be material that aides or enriches the worship experience - everything from projecting song lyrics to showing pre-produced video of performances or plays. For “mega” churches or temples the projection is also key for making a distant speaker or performer into a vital and close presence with visible expression and emotion, on displays placed throughout a large auditorium. Beyond that, houses of worship of any size often have to serve overflow areas, and provide their worship services by streaming to other venues, to congregants at home, and as outreach to the public. The organization may also wish to be able to make services available as video-on-demand.

The modern paradigm then involves both the production of media for use in the service, presentation of that media during the services, and producing and publishing the services themselves as media in a variety of ways, both live and on-demand.

Up to now, every stage of whatever tasks were to be done had to involve dedicated, specialized video equipment and infrastructure connected by point-to-point one-way connections using video and audio production cabling. The most popular standard for several decades has been SDI, though HDMI has also seen use in some production environments in recent years. The difference that IP makes is that dedicated, one-way video cabling can be dropped in favor of two-way network connections. But that difference is not as simple as it sounds, because what becomes possible for video and AV production changes completely. When a one-way chain of connections is replaced by a network, everything can listen and talk to everything else, and devices that could not have connected to standard video equipment but that can connect to the network can become video sources and production tools.

Their next topic is two of the standards for IP video, SMPTE ST2110 and NewTek NDI®. These are described as competing industry-leading standards, but in fact they have very different purposes and approaches. For this reason, many experts feel that they are very likely to end up being supplemental to one another rather than competitive.

To go a bit beyond the information in the article, SMPTE ST 2110, finalized and published in 2018, is a standard for transport of uncompressed video over managed networks (requires professional-level managed network switches with specific settings), as well as audio and data, all streamed independently to allow for maximum versatility for professional production situations. Setting aside the other elements, uncompressed video takes a lot of bandwidth. This means that the standard will require high-bandwidth networks for any more than one stream to be available - or actually, for even one stream to be available once you start moving up the resolution scale. This means that standard networking, currently 1GB Ethernet in most facilities, needs to be upgraded to more expensive and faster networking equipment, 10GB and beyond depending on the the number of video sources that need to be carried. High-end broadcast, corporate and HoW facilities can budget for this. For many cases broadcast facilities in particular have need to work in uncompressed video, so they need ST 2110.

NewTek’s NDI, available for several years, is a royalty free IP technology for transport of video, audio and data over standard networks at very high quality and very low latency. NDI engages compression to accomplish this, and uses methods that allow for no loss in further encode/decode cycles after the first encoding. The technology also has an optional mode that provides additional compression for high quality transmission via wireless networks. NDI can gain some advantage from managed network switches, but works on the more commonly used unmanaged network switches as well.

Any number of NDI video streams can be carried on a standard network and used by any number of NDI-aware destinations. NDI includes autodiscovery technology that allows NDI-aware products to see any NDI sources on the same network as soon as they go active. In the first large-scale interoperation demo at NAB a few years back, over 80 companies demonstrated NDI integration in their products, and more than 100 NDI streams were visible on the show floor’s standard network.

“…the number of products supporting NDI has reached sufficient critical mass to enable the technology to approach its full potential, allowing customers to build complete NDI workflows while having multiple choices of vendor and product at each step,” states Nick Mia, CEO and CTO of Magewell.

Regarding that critical mass, NDI has now been integrated into thousands of products in the hands of millions of users. This includes many products popular in the HoW segment, such as ProPresenter, EasyWorship, and others. Other products include Microsoft Skype, many popular production switchers, many models of PTZ video cameras from Panasonic and others, a variety of graphics packages, broadcast automation software, and a very long list more.

Forward-thinking tech and broadcast directors will be wise to begin researching and evaluating bridging devices that will allow existing SDI- and HDMI-based hardware systems to seamlessly integrate with new protocols. It is important to begin evaluating all major purchases such as broadcast cameras and switchers with AV-over-IP workflows firmly in mind in order to be good stewards of our church resources. What we purchase today for our current production environments may soon be needed in another.

There are now a wide variety of NDI-aware products from various manufacturers that fulfill that need for flexibility between traditional AV technologies and the new IP-based paradigm. Magewell, mentioned above, produces a variety of converters and encoders for easing the workflow between SDI or HDMI equipment and NDI IP-based production and AV. BirdDog, Yuan, NewTek and others also provide converters.

Panasonic, PTZOptics, Lumens, Marshall, NewTek and others provide cameras that can operate via IP (NDI and other standards) and also HDMI or SDI. The PTZ cameras offered can all simplify cabling to just a Power-over-Ethernet (PoE) Ethernet cable connected to a PoE network router or switch. Audio, video, power, control and tally all work through that one network cable.

NewTek itself has specifically been designing its multi-camera live production systems for hybrid IP/SDI (almost all current TriCaster models, 3Play 3P1) and IP/HDMI (TriCaster Mini HD-4) for many years now. The production systems all include the necessary support for NDI-aware equipment, providing PTZ camera control in the software interface and via joystick on the control surfaces that include one. NewTek also provides freely downloadable NDI applications for a variety of production needs, including Studio Monitor, which can control NDI PTZ cameras, and now also supports comprehensive control for multi-monitor displays and signage.

NewTek has also developed the NewTek Connect technologies, software and hardware products that bridge not only between SDI and IP, but in many cases between the multiple available IP standards as well, including supporting ST 2110<>NDI, when products based on 2110 begin to roll out in numbers. 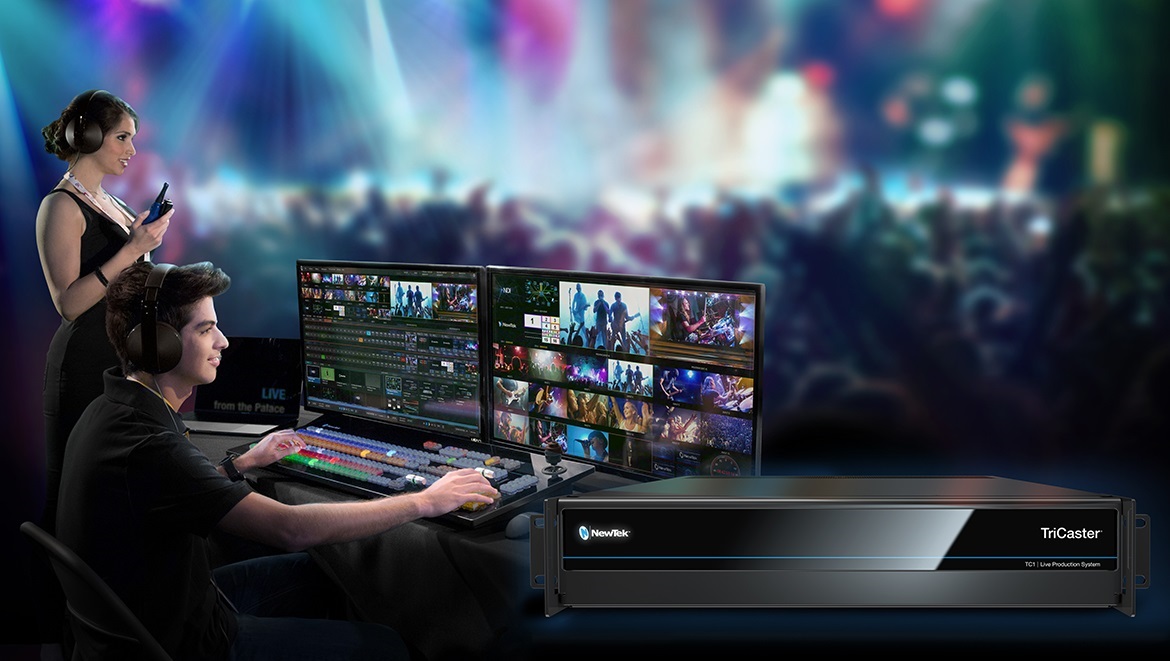 Workshop: How workflow for a Camera that can be directed changes with IP

Let’s look at one practical use case that illustrates how IP can simplify production and reduce costs. For each of the described configurations, note that there would be an intercom system for the crew to communicate over. We’re only listing the cable required to a camera operator, when present. We’ve also assumed for these case descriptions that audio from the camera is used, but it is common for the audio from cameras to be ignored and instead audio from the venue PA system is used over all video sources.

Traditional Production Requirements for a standard camera to be directed:

Just accounting for cables, we have from 4 to 6, and most of them are expensive, heavy, dedicated audio, video, and control cables. Since the audio mixer may send multiple mixes plus the individual camera source audio to the Switcher, there could be more cables involved even in a very basic setup.

Traditional Production Requirements for a PTZ Camera to be directed:

Still 4 to 6 cables at minimum, still expensive, heavy, dedicated audio, video, and control cables. Note that not all switchers include PTZ control so that “optional” camera controller will be a requirement in that case. We may have spared one operator; or at least may have enabled one operator to control multiple cameras.

NDI Production Requirements for PTZ Camera to be directed:

Just 2 to 3 cables, all inexpensive Ethernet. Both the Switcher and the Audio Mixer just need a single connection to the network to handle as many sources as are available, and for the audio mixer to feed any number of mixes of those sources to the Switcher. NewTek TriCaster production systems can control most makes/models of NDI PTZ cameras. 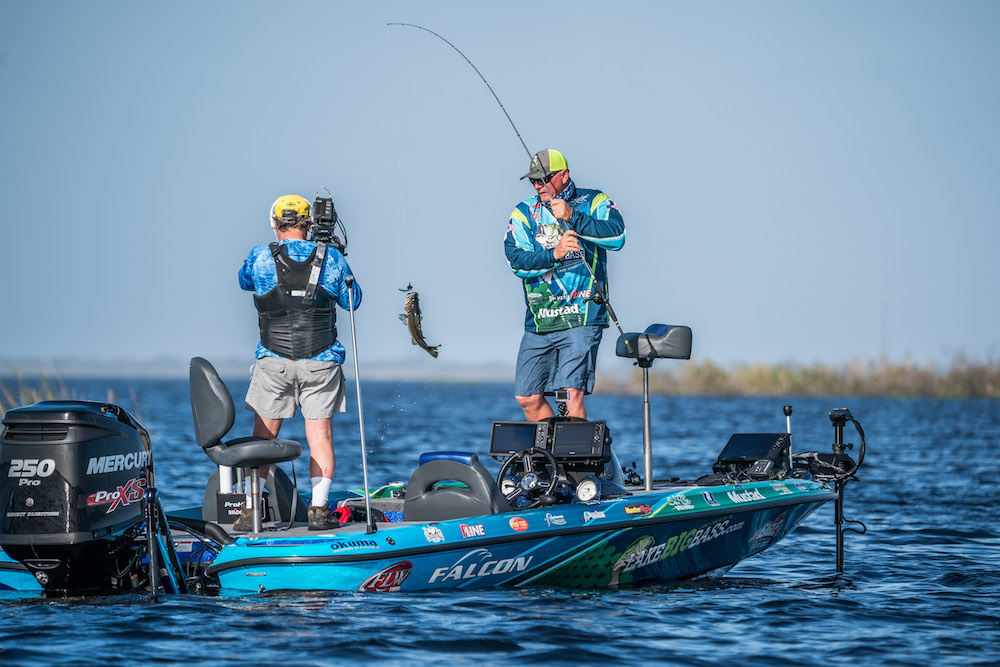