Fans of the Marvel® Avengers squad of superheroes are well acquainted with Iron Man and his alter-ego, Tony Stark.

In case you’re among the uninitiated, Tony Stark stands apart from most other comic book heroes in two ways: first, he doesn’t conceal his identity when he wears his Iron Man suit. In fact, he publicly declares it.

And second, his powers don’t come to him through accidental, supernatural or biochemical means, but through engineering. Tony Stark uses equipment that he designs himself, the Iron Man suit he built with dozens of hidden devices and capabilities to augment his own human abilities.

Tony Stark takes existing technology, and applies his renowned ingenuity and tenacity to create something more useful and larger than life to solve his problems – making him arguably the most industrious and creative character in the entire Marvel Cinematic Universe.

Studio INVATE, a Bangkok, Thailand video company, has a reputation for sharing these inventive traits with Tony Stark. And the company’s live production armour of choice – complete with dozens of hidden capabilities available to augment its own – is the NewTek IP Series.

Cool Even Without The Armour

“Cool” is part of the Studio INVATE brand.

But in between the studio and on-location work for clients, the company’s crew of 14 full-timers and a few dozen freelancers gear up for their not-so-hidden passion: live-streaming video game tournaments.

Explosive gaming popularity in the Southeast Asia region is fueling Asia’s 44% contribution to the total global population of esports enthusiasts. According to Esports Media Hub, Thailand has in excess of three million active esports participants, representing almost 5% of that country’s population.

It’s a perfect market for Studio INVATE, where gaming is a passion for nearly the whole staff.

“We play all genres of games and each of us has several years of experience in the game industry in Thailand and Southeast Asia,” according to Pachara Ruangrasameejantorn, aka “Benz,” the company’s co-founder.

Studio INVATE’s public mission is, in fact, to be a force in transforming the esports industry in Thailand, producing broadcasts so compelling that “audiences will watch game tournaments with the same level of excitement seen in sports tournaments.”

In all, the studio produces the live stream broadcasts of 15 major esports tournaments in a year, each with up to 40 gamers competing for winnings of millions in local currency and up to 50,000 spectators viewing the live stream. The rest of the company’s weekends are filled too, with an additional 30 medium-sized and smaller esports events.

They’ve grown to become the largest production company specializing in esports in Thailand, and they want to grow more still.

Facing the desire to expand, and the limitations of SDI-only production in a computer-based world, Benz and his team knew they had to go with IP video production.

They already use NewTek TriCaster® 8000 integrated production system along with the NewTek 3Play® 4800 replay solution for their live production services, but the requirements in esports production were changing.

Says JM Lim, technical training specialist for NewTek Elite reseller-distributor Blonde Robot, “When you talk about esports, and covering these competitions in terms of game play, you could have 10 individual players or even 20.”

In other words, it’s not a field or court sport where group activity means a separate camera isn’t required for each individual player at all times. In esports competitions, since anything can happen at any time, each player has coverage. “You need more camera angles involved in the production,” says Lim, who worked with Studio INVATE on installation and training.

“Switching live between real-world players and the actual game on a computer screen, without having to use scan converters – and without coming out HDMI, converting into SDI, and then going into the TriCaster or any other switcher,” says Blonde Robot director Eamon Drew. “With esports, the content is on a computer and playing out at 1080p 60f. Using NewTek’s NDI® technology, the video coming over the network is already in the right format.”

With the size of the typical tournament events INVATE produces, they calculated they’d need to switch among at least 24 hybrid IP/SDI feeds.

As an example, “Twelve come from SDI sources such as the players’ POV cameras, the announcers’ fixed cameras, and the roaming action cameras. The rest are from computer sources, like the gaming screens of the players plus graphics and effects, which we make high-end, similar to live sports,” says Studio INVATE’s Benz.

To hit that 20+ input requirement, with most sources coming in over IP, he and his team ultimately selected a NewTek IP Series including a Video Mix Engine VMC1 (which can switch up to 44 external inputs, from both SDI and IP sources) and a 4-stripe Control Panel.

The first thing Studio INVATE did was expand the VMC1 unit’s built-in SDI capacity with a NewTek NC1 SDI input units to achieve a total of 12 SDI inputs.

The next thing they did was add a replay controller, a NewTek TimeWarp, so they could have an operator performing live replays during the tournaments and in post-game, always a sports fan favorite.

And once the complete system was installed, they did what Tony Stark would have done if the NewTek IP Series were his suit of armour: they customized it to maximize its advanced, built-in capabilities, and augmented it with the super abilities they needed for maximum creative firepower.

“The people at Studio INVATE are really passionate,” says Blonde Robot’s JM Lim. “As soon as NewTek came out with NDI, they read up on everything the technology could do.”

“Up until now, it has been unusual to see the creatives in a production house become developers, but they’ve become so familiar with NDI that they can develop any integration they need to happen.”

Benz gives two examples – graphics and tally, both over the network using NDI. “We use CasparCG. It’s open source so we’ve been able to make use of the full graphics engine and customise the CG application. NDI allows us to send both Key and Fill into IP Series easily without worrying about connecting more BNC cables, so we pull graphics into our IP workflow during game production.”

Additionally, Benz says, because NewTek’s standard Tally over NDI can support up to 44 cameras, with the SDK they can modify specific functionalities for their own use to integrate with the features of their existing Blackmagic cameras.

The next augmentation was to upgrade their network. “Studio INVATE invested in a 10Gb network switch and wired everything for 10Gb,” says Lim. “They were obviously prepared to send everything around over IP.”

“We wanted to have a network that was fast enough to always be comfortable, with so many IP sources coming into the IP Series,” Benz says.

“Having a lot of bandwidth lowers the possibility of any kinds of error on the LAN, which is important because we want to use IP video. We are sending gaming screens and graphics all around the network, we’re doing lots of fast and big productions, and we want the flexibility to configure anything during the show.”

At the same time, when the company takes its show on the road to major events, esports venues don’t always have a high-speed network.

According to Benz, “NDI uses minimal CPU power from the gaming PCs that we’re passing to the IP Series, so we can flexibly send the picture, send the screen, send the camera through NDI. If we have a low bandwidth LAN, we can take the low-profile, low frame rate, and it still comes through with a high-quality picture.”

Creativity is Studio INVATE’s stock in trade, and they extend every visual capability of the IP Series to its creative limits – and beyond.

M/Es are one example. M/E, or mix/effect, is a palette of layerable visuals on which multiple switcher sources can be individually positioned, arranged and treated with special effects, resulting in its own composition – which can, in turn be brought into a program as its own unique source. IP Series has eight of them, each supporting four sources plus four key layers.

Says Benz, “We have to. Because esports is now so popular in Asia, the competitions are like a mix of sports and entertainment. The live events have high energy music, with the light and sounds.” This is the style the spectators like to see, so this is what Studio INVATE produces for its streaming audiences.

They further heighten the visuals with their customized implementation of the NDI SDK, using the CasparCG application to drive graphics, animations and titles. Each tournament requires its own unique look and no two productions are the same.

True to its Tony Stark philosophy, Studio INVATE has mastered production problem-solving in live esports coverage through creativity and inventiveness, allowing it to stand apart in the flourishing esports market in Southeast Asia.

Mr. Lak Taechawanchai, director for elite dealer and integrator, Imagine Technology Co., Ltd. in Bangkok who represented NewTek systems during Studio INVATE’s purchase (and who generously provided language interpretation during our interview with Benz), provides another perspective of this ultra-creative company. 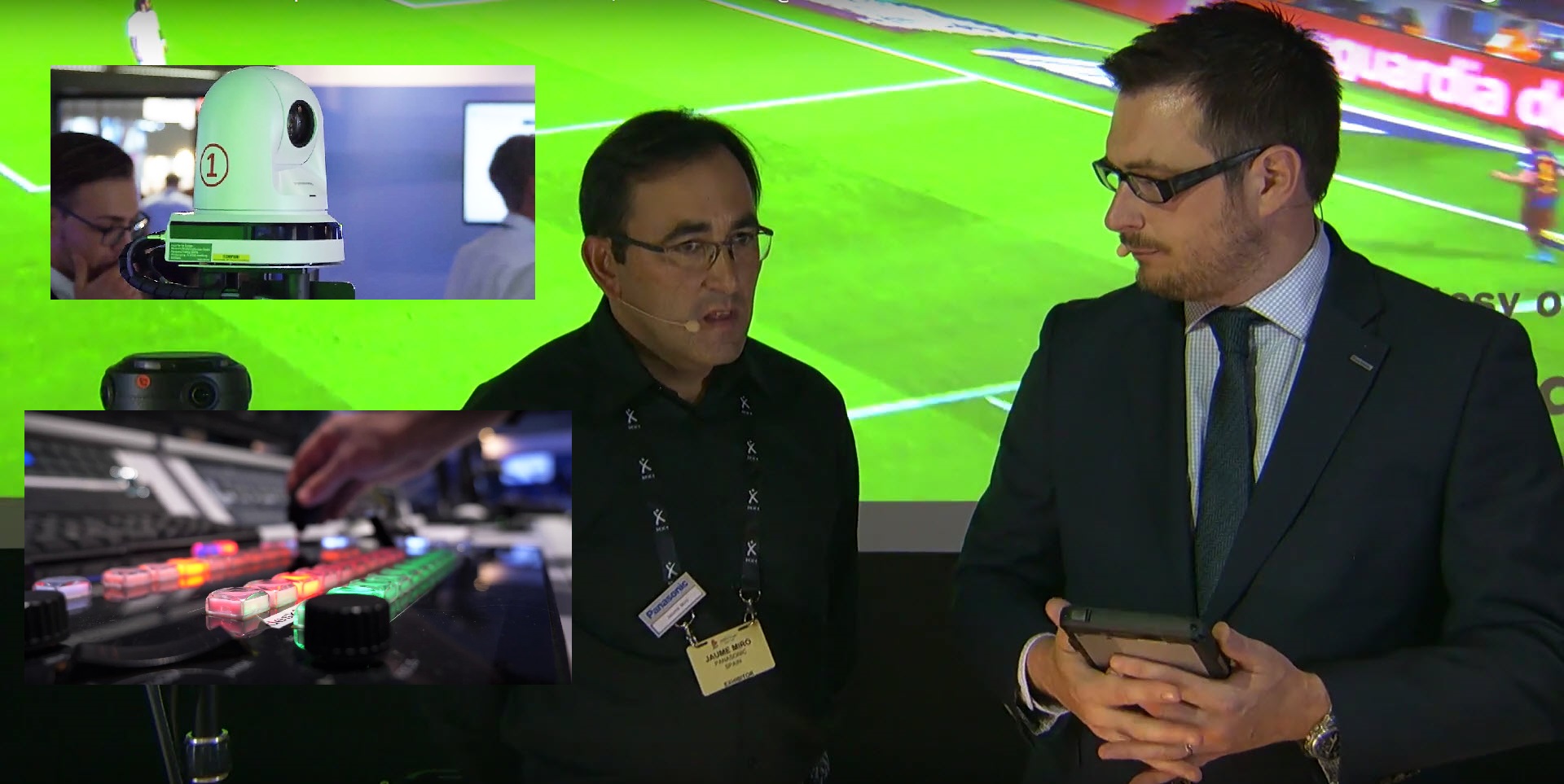