TV news may not be rocket science, but the technical complexity of TV stations that produce local news rivals a moon-shot. TV newsrooms are as unique as their call letters. The uniqueness includes the wide spectrum of technical gear supporting the local news operations and live newscast production.

In the analog days, people with typewriters created newscast scripts, news rundowns and station FCC program logs. TV station electronics were generally limited to making and transmitting pictures, sound, and crew communications. In modern digital newsrooms and throughout station digital infrastructures, nearly every electronic device is “plugged in” to everything else.

The newsroom computer system or ‘NRCS’ is the one thing in the modern electronic newsroom that works as it was originally designed, and it can work very well. There’s a reason why Edward R. Murrow had a chalk board to plan his radio broadcasts in the 1930’s and 40’s. It’s the same reason today’s electronic newsrooms have the modern equivalent to yesterday’s chalk boards and white boards, the NRCS.

What adds significant value to NRCS functionality was and is the Media Object Server (MOS) protocol. MOS is what allows the NRCS system and newsroom automation system to communicate with station production gear.

The real-world challenge of using the MOS protocol in most TV stations today is updating the software drivers for all the gear that the news production automation touches and controls. Typically, that gear can come from multiple sources and brands, and typically includes stand-alone servers, still-stores, graphics, titling systems, routers, production switchers, virtual sets, audio, PTZ cameras, and more. Its wide diversity can sometimes encumber TV news operations.

The other side of the challenge is for manufacturers to keep all drivers updated for all their legacy and new gear that could potentially interface with news automation and NRCS. Wouldn’t it be easier for the automation and NRCS to interface with a single device that provides all the functions typically accomplished by individual components from various manufacturers?

Since that industry adoption took place, the lack of a unified driver updating system has become more and more pronounced, adding layers of system complexity. Systems have needed to support a growing spectrum of manufacturer’s equipment, drivers, interfaces, and protocols, typically unique at every station. Additional drivers add even more layers of complexity to the live news production process, making technically clean and mistake-free live newscasts harder than ever to get with consistently.

NewsMaker Systems was founded by Dean Kolkey and Tony Chick, two pioneers in computerizing and automating printed newspaper and magazine production, starting in 1974. In 1989, the company debuted its NewsMaker Electronic Newsroom (NEN) at the 1989 NAB Show. In the 1990’s, NEN was widely adopted in TV news and sports including the CBS Owned and & Operated stations, NFL Today and CBS Sports including three CBS Winter Olympics broadcasts.

In 2014, NewsMaker Systems recognized the NewTek TriCaster’s integrated production system potential to be the single device it could control in an MOS-based newsroom system. The company began working with the development and technical teams at NewTek to integrate Tricaster with a suite of NewsMaker Systems solutions to be used in live newscast environments.

“The intent is for NewsMaker and TriCaster to provide a more streamlined solution because the old way is still so complex,” said NewsMaker’s VP, Lan Merrill. “Under the hood of our automation, the incredibly complicated combinations of MOS commands, infinite variations in live news, and real-time control of the TriCaster, are all baked into our automation software. The messy technical stuff is neatly tucked away in the NewsMaker software, so all the producer has to worry about is telling great stories.”

Merrill added “This is possible because NewsMaker only has to worry about two products to connect to, the NRCS and the TriCaster. This approach works incredibly well.”

Internet Protocol (IP) connectivity is what bonds these systems together seamlessly, and it uses the transport stream and bi-directional communications power of NewTek’s NDI interface. NDI works with existing network infrastructures and is not self-limiting as many standards can be. For example, with unlimited choices of NDI sources available under NewsMaker automation control, the TriCaster is also a routing switcher with nearly infinite inputs and outputs.

The NewsMaker/TriCaster system simplifies live news production by moving the most complicated technical challenges from the broadcast level to the IT level. The stability and production power of redundant TriCasters, controlled by the NRCS via NewsMaker, leverages IT technology to offer the most affordable and reliable news production solution available for news broadcasters in all markets. 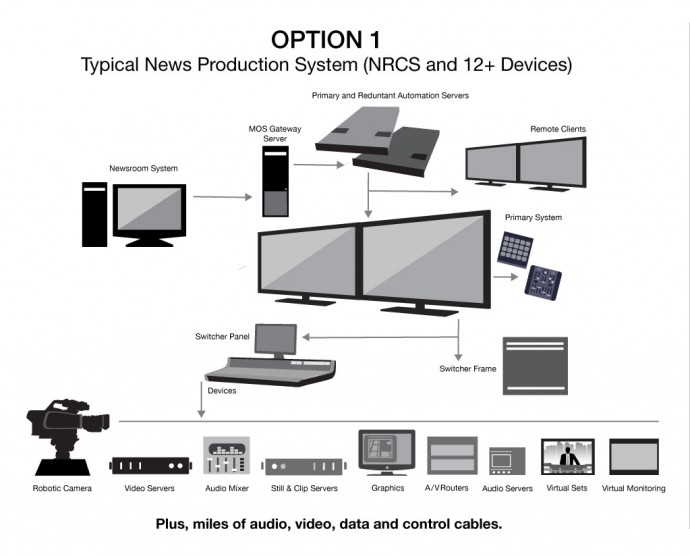 Many manufacturers sell peripheral gear for newscast production, such as graphics systems, servers, and production switchers, and many provide block diagrams showing their product at the center of the action. But in the modern newsroom, everything from lighting to video clip playback is controlled through a MOS gateway. A more accurate drawing would identify the NRCS as the central point of all things news.

The NRCS is where news production starts and ends. It controls all the elements of the production. The most obvious downside is that the NRCS communicates through MOS gateways, which add more layers of complexity.

The NewsMaker MOS interface enables the TriCaster’s array of internal production tools to be placed as objects directly into the newsroom rundown as the scripts are created. This includes MOS objects for the video switcher, mix/effects, audio, IFB, CG, clips, virtual sets, and cameras PTZ or robotic.

NewsMaker automatically loads all the production elements into TriCaster’s media bins which are immediately available to the operator, cued and ready for air. Any rundown changes immediately update the TriCaster.

Back in the day, stations could produce newscasts with a crew of a dozen or so people on headsets. Today, with NewsMaker and TriCaster one producer with a rundown can make the show happen alone from a computer in the newsroom. “A lot of newsrooms are not ready to do that yet, because a human may still need to be able to jump in and fly the show manually if necessary,” Merrill said. “It depends on how the workflow is designed. The NewsMaker system with the TriCaster can make the technology used to create the show invisible to the producer.” 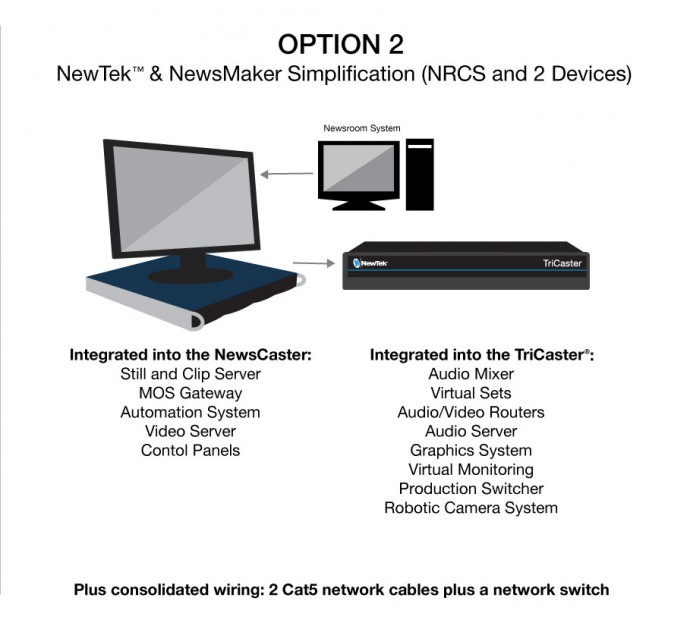 NewsMaker is the glue and NRCS is the brain, large and in-charge. NewsMaker is simply the interpreter. It interprets the NRCS data and hands it off in real time to the TriCaster with the commands it understands.

In addition to the NRCS constantly updating NewsMaker with rundown changes, the TriCaster also updates NewsMaker with instant status reports on everything it is doing. NewsMaker doesn’t fight the NRCS, it embraces it. It is where NewsMaker and NewTek come together.

Airplanes use redundant systems. They have redundancy system plans A and B and use Plan C as a last resort. Redundant systems are designed to keep airplanes from crashing.

In TV news broadcasting, a redundant system is two individual systems in separate racks and disparate locations, fed and operated in parallel. Such systems are used by some station groups and networks that allow any station to be run from any other station.

Until now, making an instant global transfer switch to a redundant news production system required hundreds of electrical relays, I/O ports, and connectors. Monitoring and tally further complicate the transfer switch control issues. Today, all that is done as IP data switching, and it can be easily handled at the IT level using an “If System A fails, switch to System B” software routine. In the blink of an eye, the show continues being produced but on a different subnet.

NewsMaker only has to connect to the NRCS and TriCaster, compared to potentially hundreds of variations of external devices with other news automation systems. Two companies using only their two protocols, versus multiple companies’ using hundreds of variants, makes the NewsMaker/TriCaster system, quite simply, about 2% as complex.

The overall goal of the NewsMaker/TriCaster system is to make live production technology transparent and give control back to the newsroom. NewsMaker itself is composed of two modules, NewsCaster Connect and NewsCaster Control.

NewsCaster Connect enables all of the scripted elements in the NRCS rundown to be tightly integrated with the full production capabilities of the TriCaster and IP Series. In this “semi-automated” operations model, all of the MOS assets are loaded and ordered into the TriCaster automatically, but an operator is still running the show from the TriCaster control surface.

NewsCaster Control uses “NewsStyles”, or pre-defined newscast elements, which are available as drop down selections and then dragged and dropped into the scripts, with the same workflow as MOS enabled devices. This allows the producer to speed the entry of frequently repeated sequences and steps so a very complicated string of newscast elements and events can be scripted with just a few drop-down menu selections. There is no need for additional automation coding and modification, which are still required with legacy newsroom automated production systems.

The show can be run from the control surface, a button box, keyboard, and mouse, touch screen, or in the fully automated mode, “hands-off” from show start to show finish. Daily newscasts, including their complicated graphics, should not have to be assembled on-air and in real-time by a production department, day after day. Time consumed by that kind of work can be reduced depending on the level of automation dialed into the NewsMaker.

The NewsMaker/TriCaster system simplifies live news production by moving the most complicated technical challenges from the broadcast level to the IT level. The stability and production power of redundant TriCasters, controlled by the NRCS via NewsMaker, leverages IT technology to offer the most affordable and reliable news production solution available for news broadcasters in all markets. 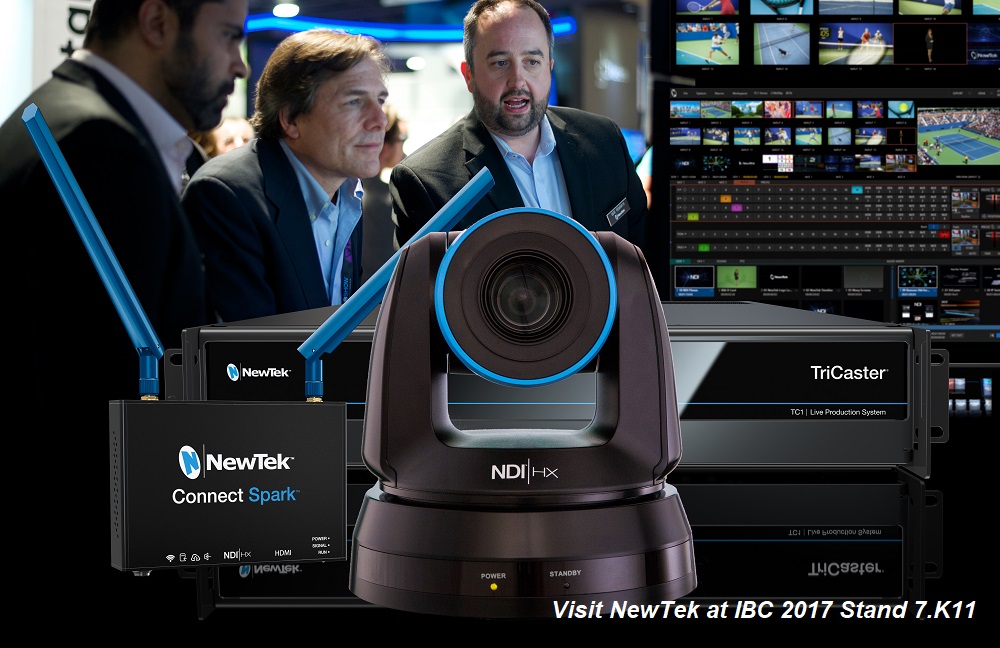 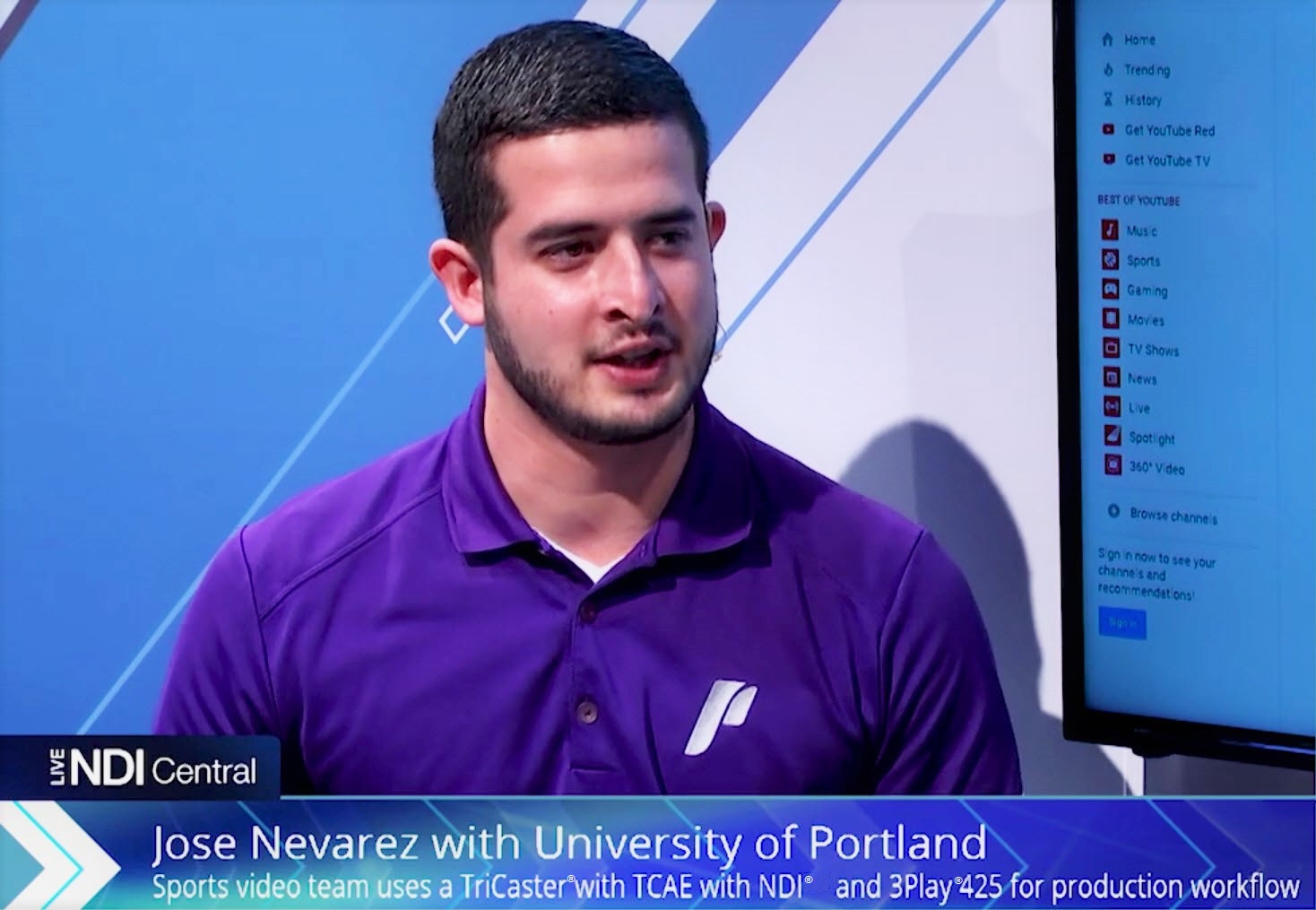 NAB 2017: Interview with Jose Nevarez of the University of Portland