It’s been a problem for businesses for decades. What’s the best way to quickly and effectively disseminate product information and support material to a far-flung sales force spread across miles of territory? For Whirlpool, a global corporation headquartered in Benton Harbor, Michigan, the challenge wasn’t new, but the answers they came up with were.

As manufacturers of the Whirlpool brand, as well as such other well-known appliance brands like Maytag, KitchenAid, Jenn-Air, and Amana, the challenge was a daunting one. The Whirlpool North America sales force B2B customers need a steady stream of information about this expansive and ever-changing product line to do their jobs efficiently. The people on the sales floors need effective strategies for touting Whirlpool competitive advantages, and they need an opportunity to get their questions about a particular product answered on the spot. But how to do that without spending millions on training and travel? It was a problem that vexed the company, just as it vexes every company of its size.

Enter Ryan Scott, hired in 2009 as Media Manager for Whirlpool’s North American Sales Force. Scott, who came from a television production background working for networks like The Discovery Channel and The History Channel, confronted the challenge head-on. Scott quickly realized that creating effective video content and the potential for live interaction with product experts explaining Whirlpool’s many appliance lines was essential to engaging the sales troops on the ground, thereby increasing sales and moving the company forward.

“Content is king,” Scott says. “Studies say that more informed sales people are going to sell more. The more informed consumers are about what you have, the more likely they are to buy. From a marketing standpoint, websites with video content create higher click-through rates. People are on the website longer. They’re more likely to buy if they see a video, but it’s got to be a good piece of video.”

When Scott started at Whirlpool, the company was using WebEx presentations to disseminate product information to its trade customers. The presentations were bare bones, one-camera productions, utilizing on-camera hosts with PowerPoint decks for visual support.

“We had a couple of people as presenters,” Scott says. “We had somebody as kind of a host who was behind the scenes, but you couldn’t really see them. And the engagement wasn’t there. The content was fantastic, but the vehicle, the deliverable, the video quality was terrible, and slides were only okay. It wasn’t a polished event. For our trade customers, we needed something that was more engaging, more polished, more of an experience, rather than just straight-up training.”

Advantage Live to the Rescue

To that end, Scott created a regularly scheduled webcast known as Advantage Live. “We would have different product vignettes and projects hooked up, and we would do live product demos. We would also intertwine pre-produced segments that we created about product features, competitive videos that we created. And we would also create segments we called Appliance Science, explaining features in-depth. We also had a question-and-answer portion towards the end of every event.”

Even though the potential audience for these live webcasts was small (less than 11,000), Scott saw the benefits of Advantage Live immediately, which came in the form of increased viewer engagement. Initially, Scott was getting just over 100 live viewers for his webcasts but was able to rack up some really big viewership numbers by making the content from each Advantage Live webcast available on-demand. “Our money is the on-demand,” he says. “Last year, we had three thousand viewers who watched a live event, but we had over fifty thousand on-demand hits. That’s really where the money is.” 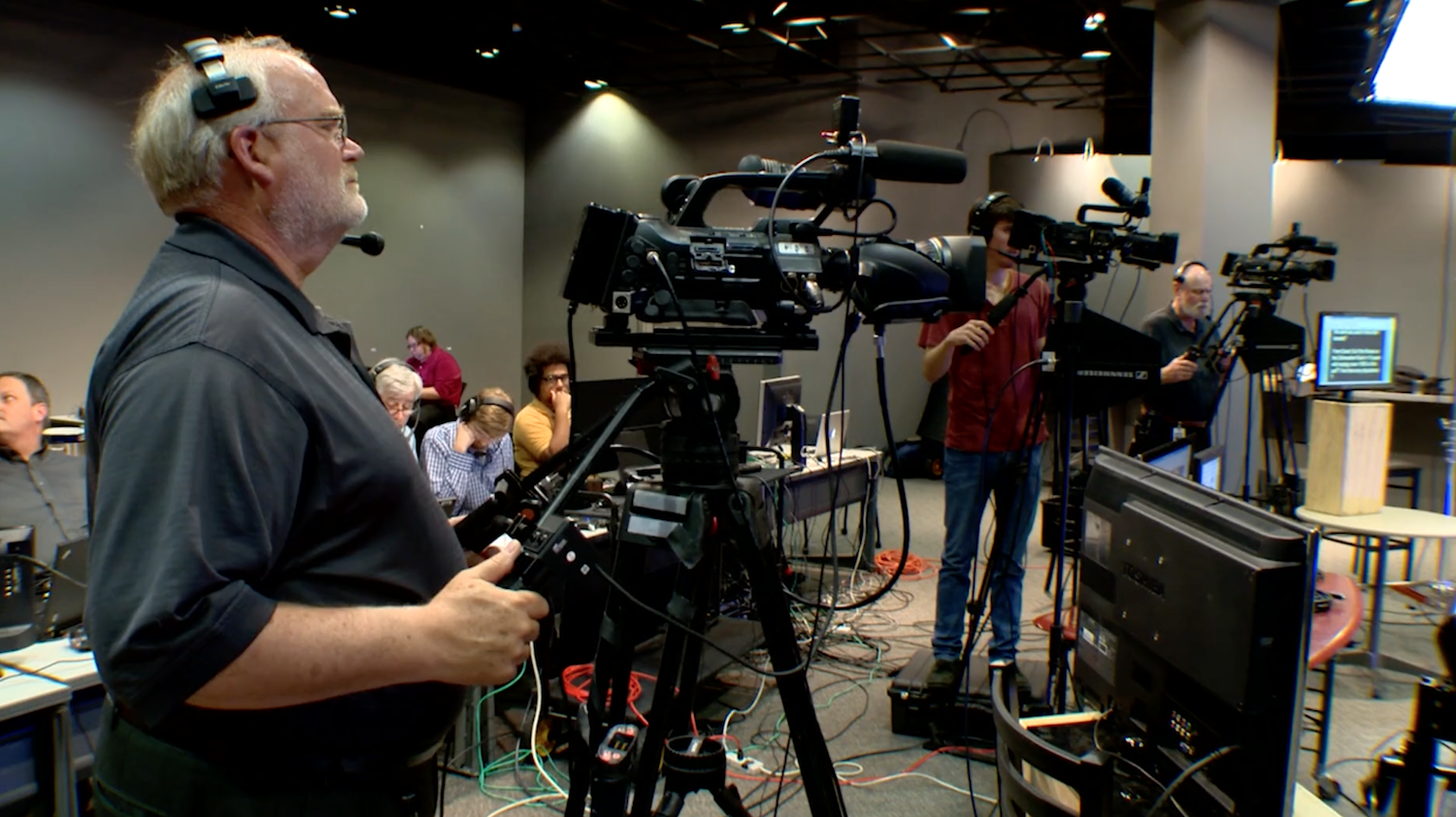 In order to make his content more easily digestible for his target audience, Scott uploads “snackable segments” from his Advantage Live webcasts to a special training website. The full live web events can range in length from thirty minutes to an hour, but Scott’s “chapterized” content is much easier to consume.

“We found that a lot of people don’t watch thirty minutes at one time,” Scott explains. “So, we edit the event into chunks. These are your product feature and benefits, these are your selling skills, and this is your competitive information. That way, you can go pick out the information you want. We’re still getting the entire hit, but you might start watching the thirty-minute video, and then, you can skip to the next chapter.”

One of Ryan Scott’s first tasks upon arriving at Whirlpool in 2009, was convincing his sales leadership to create a modest studio environment to host his Advantage Live webcasts, and the other production content he was hoping to create. The company already had a full-blown media services group, with their own elaborate production facility and their own budget, but Scott yearned to have space of his own. With a bit of creative remodeling, he was able to convert two adjoining 150-square-foot offices into a vest-pocket studio. And at the heart of Scott’s newly-created production facility was a TriCaster 450.

“The entire investment was about $85,000, including construction,” Scott says. “From electrical to rearranging that HVAC, tearing out the wall, buying the cyc wall, and everything; it was about $85,000. For lights, we have Keno Flo’s; four Image 85’s, and four Image 45’s. They’re all 3200-Kelvin based. We have four cameras; two JVC 750s, and two JVC 200’s. The 200’s we use strictly for live events, because we have a converter box. Basically it outputs 1080I, so we just need to convert them to a signal for the TriCaster. We use the JVC 750’s, for anything we’re doing externally. For interviews, we typically use the 750s, but we’ll also rent cameras, like a SonyA7, or a Canon C300 to get a more cinematic feel, that better quality we need for the product stuff. For our live webcasts, we strictly use the JVCs.”

To generate graphics Scott is currently using a program called CasparCG. The program has its limitations, but since it’s an open-source graphic program, it’s extremely cost-efficient. “Swedish Television developed it,” Scott says. “Rather than getting a separate Chyron machine, which we can’t afford, we’ve been trying to figure out graphic solutions that integrate with the TriCaster.”

The key component powering Whirlpool Corporation’s production facility is a TriCaster 450 purchased back in 2011 from AVI Systems in Grand Rapids.  Whirlpool has had a long relationship with AVI Systems, purchasing most all of their production equipment from AVI since the development of their in-house endeavor.  Scott credits the TriCaster with enabling him to produce such a wide range of content within his limited budget. “The reason I’m attracted to the TriCaster is because it’s so many different tools in one. And it’s cost-effective. You have your DDRs, you have your graphics internally, you have your audio. You’re managing it all in one place. That’s why we love it ––the flexibility of the inputs, the flexibility of the outputs. I’ve got to admit, I’m a NewTek geek from way back in the day of the Video Toaster. The products have always been great, the presentations have been fantastic, and NewTek innovates, which is really nice. And the innovations are pretty quick.”

Resistance From GIS: Problems and Workarounds

Scott currently records his many hours of content using an Atomos external recorder. It’s not the most efficient means of saving content, but resistance from Whirlpool’s Corporate GIS staff to recording content directly to the company’s network has necessitated using the external recorder as a workaround. “Our GIS people want to install anti-virus software on the TriCaster,” Scott says. 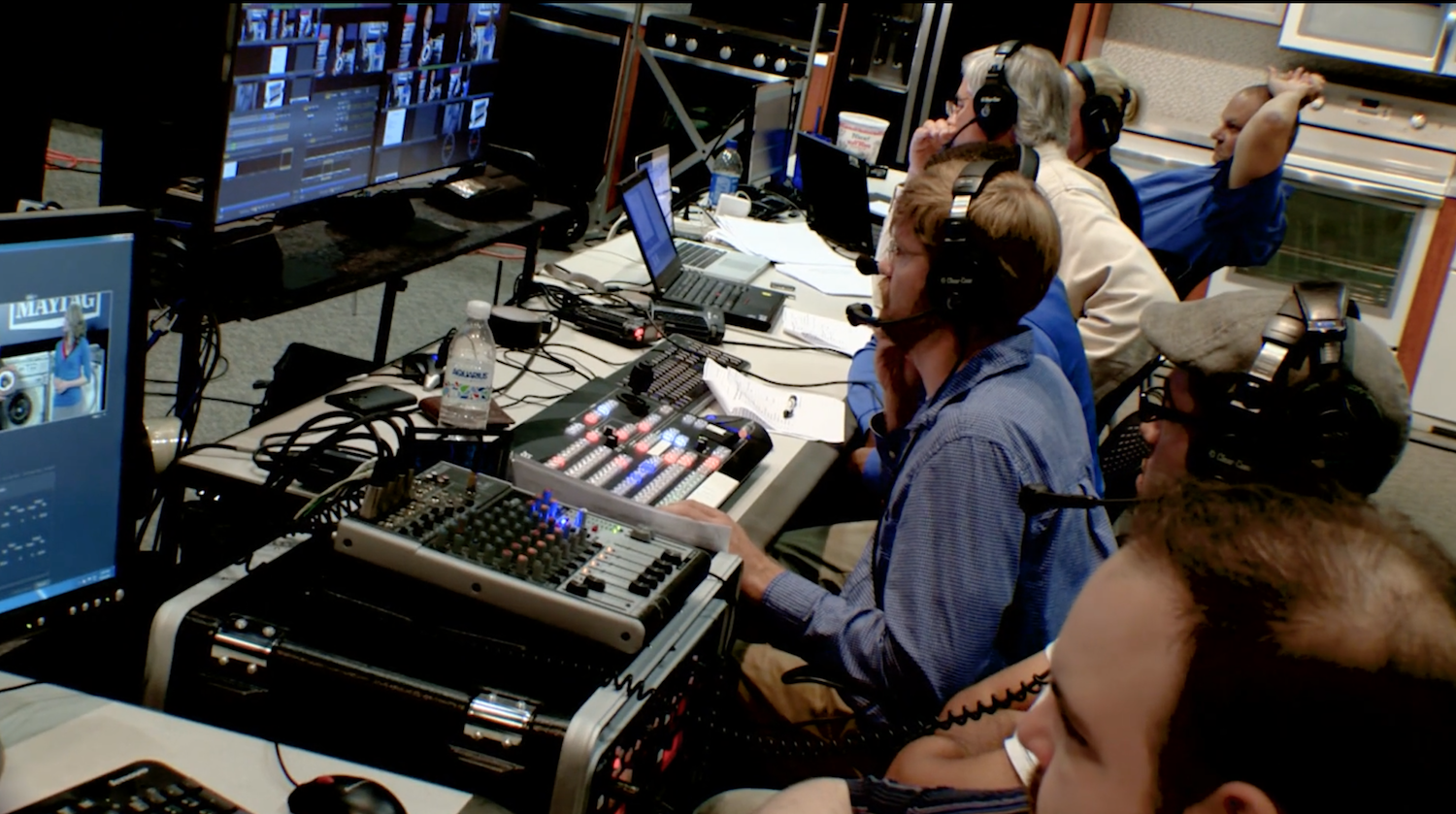 It’s a problem many TriCaster users face, since anti-virus software interferes with the operation of TriCaster’s software. “That’s one of the things about the TriCaster we have right now,” Scott says. “I can’t get it on my network. So when we do our live stream, we’re not using the TriCaster itself. We’re using a separate Flash media live encoder box.”

The Folks in the Law Department

One internal challenge facing Scott and his staff has been the need for Whirlpool’s Corporate law department staff to vet and approve all the pre-recorded content he’s posting on the company website. Initially, Scott would make the content available to Legal following each Advantage Live event. Then, he’d have to wait for the content to be reviewed. Once Scott had the Law Department’s input, he and his staff would set about making the necessary content changes in the edit booth before finally posting the content for his sales force viewers. This delay wasn’t satisfactory for our audience.

The solution to the problem was a simple one, pre-produce all the content for the Advantage Live events ahead of time and get approval from the law department before the event ever takes place. “Most of the videos that have been created for the events were already vetted through legal for the most part. It’s what our talent is saying live that has to be approved. Next year, we’re going to do a look-live, except for the question and answer. So rather than submit our material from the webcast afterward, we’re going to go through the law department first.”

Utilizing their TriCaster 450 and a relatively small production footprint, Ryan Scott and his staff at Whirlpool have been able to disseminate product information and support their sales staff in an unprecedented way. The company’s Advantage Live presentations have been recognized in the world of corporate video, winning several prestigious Telly Awards. And Scott has been able to produce this award-winning content while saving the company money.

“There was nothing like this before, there was nobody really producing content, it was all one-offs” Scott says. “So, the way we try to show cost savings is, we analyze what hours we’re putting into a project, and then, we do an average of what the typical agency rate would be. I think our local agency bills anywhere between $85 an hour to $150 an hour, depending on what the service is. So, we say, “OK. We’ve done this many projects, it took us this many hours. This is what our cost savings would be.” I think the first year, we saved Whirlpool seven-hundred-and-fifty-thousand to a million dollars.” 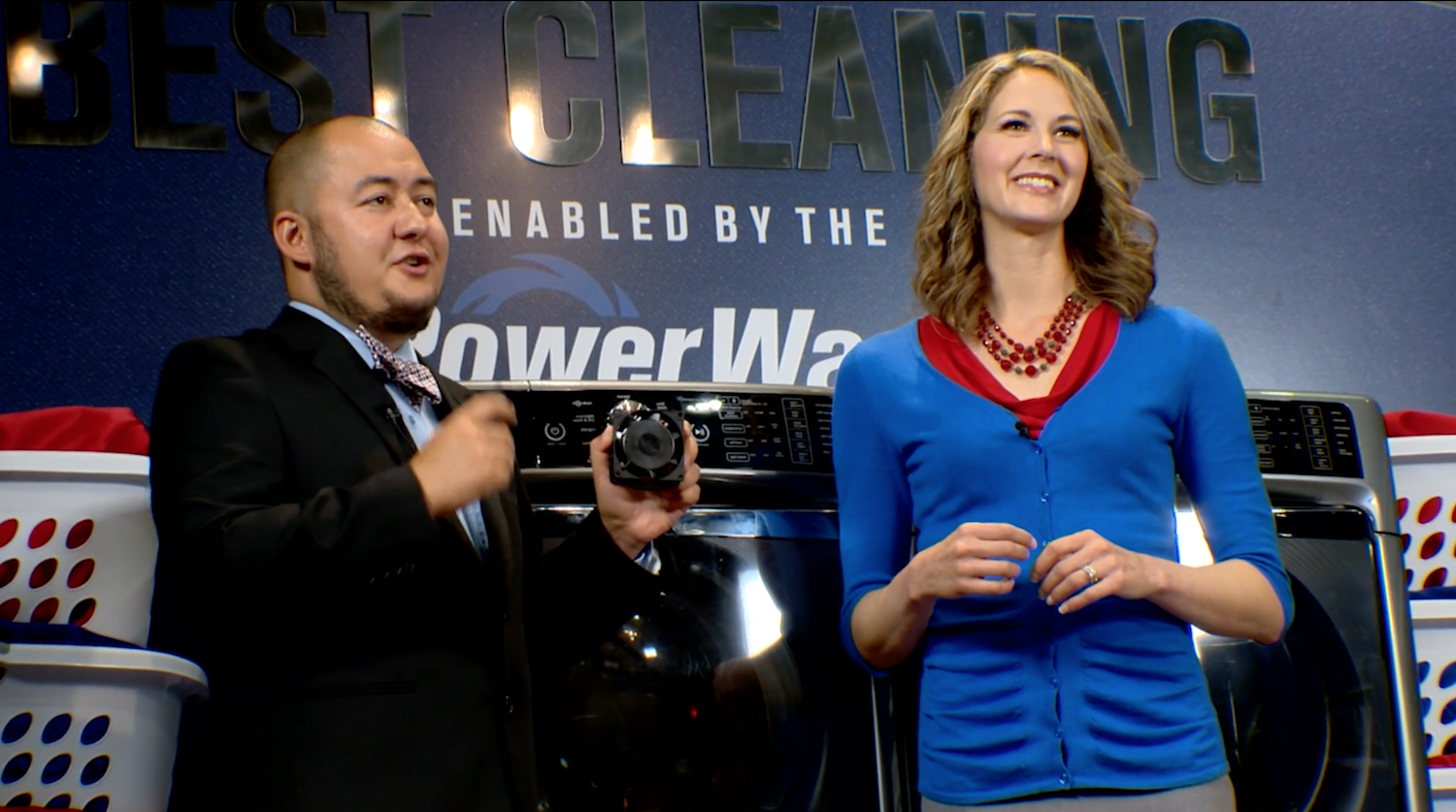 Despite these impressive cost savings, Scott and his production unit still manage to produce a huge amount of content, totaling over fifteen hours of highly-produced, engaging training content every year. According to Scott, his staff’s efforts have been noticed throughout the company, and every year, their role becomes greater.

“Especially from a training aspect. I don’t think there’s anybody in the industry doing what we’re doing, at least in the appliance industry. One of the Telly Awards we won was for an Advantage Live program we did last year. They said, ‘We’ve never seen anything like this before from a training standpoint.’ Which is fantastic, it’s wonderful. I just want to continue to improve on it however we can within our budget. I think other companies could benefit from it as well.” 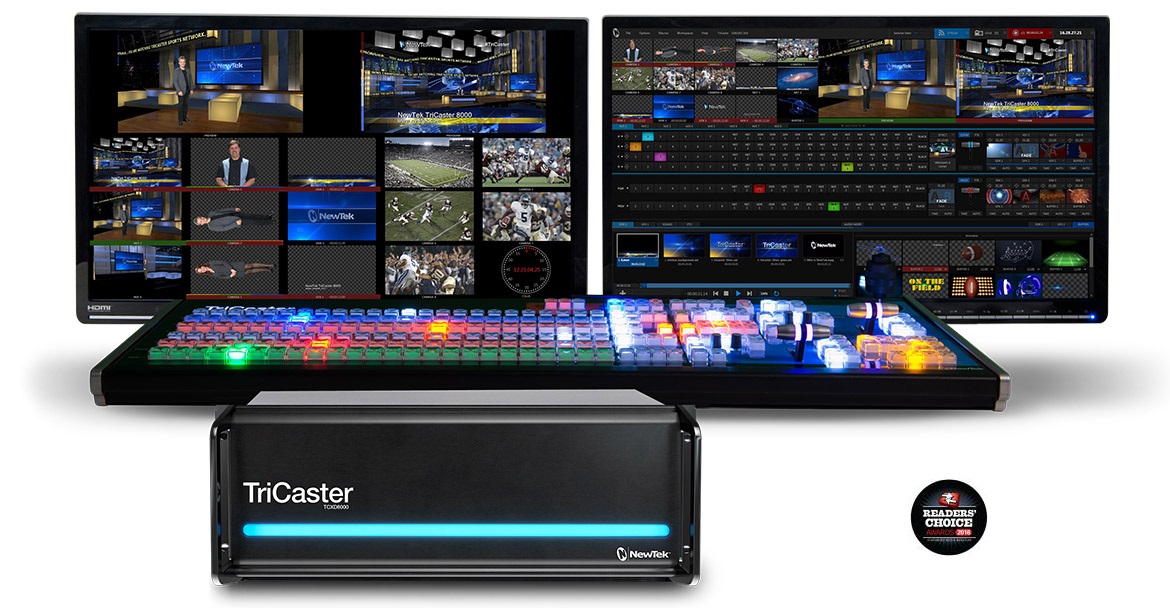