by Michele Puccini, CEO of ClassX

At ClassX, NDI has been immediately recognized as a key technology for the development of really impressive, innovative, modern, flexible products regarding our branch, which is Broadcast CG.

From a ClassX-developer point of view, we can say that NewTek’s NDI technology has some important advantages over possible competitors:

How will NDI impact on the productivity of ClassX customers?

The integration with NDI allows our customers to easily (and I earnestly mean easily) build a complete IP workflow for graphics and media.

NDI allows 1-to-N connections over-IP between NDI-enabled applications (like our LiveBoard v6 application). This is another great advantage over SDI: you simply don’t need SDI routers to distribute your production. What’s wrong in saving time and money instead of purchasing, wiring and testing an SDI-based production workflow? 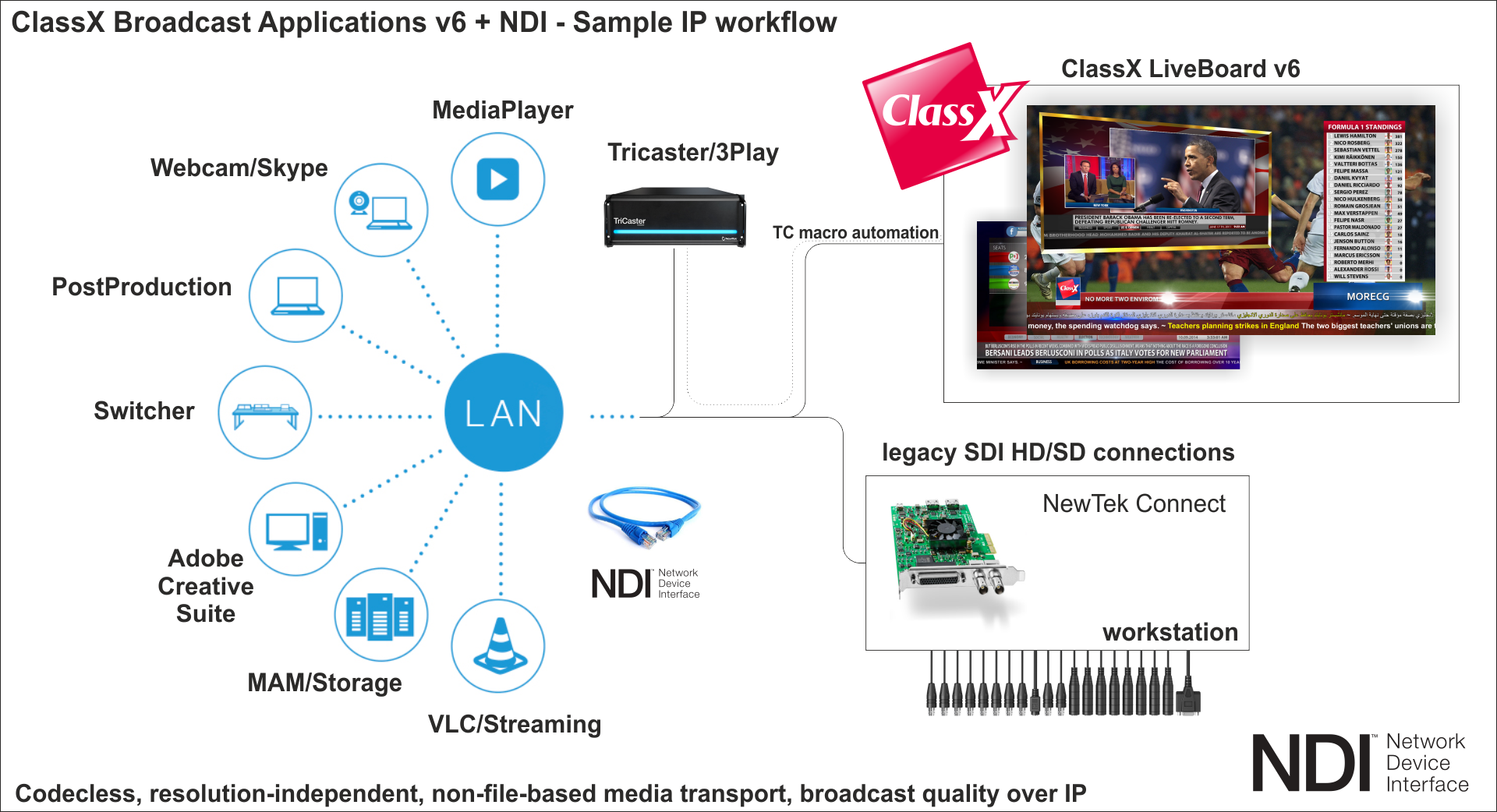 In order to connect NDI-enabled applications and devices, you only need a network card on board and a network connection. A Cat 6-based network is enough to support many full HD 1080i50 channels in real-time.

Of course, mixed SDI-NDI workflow is really easy to achieve, thanks to a number of tools that NewTek is actively developing and making available to customers. Most of them, again, are free.

These tools allow customers to monitor, send, receive and integrate NDI with other legacy video technologies. One of the most important tools is NewTek Connect, which has been designed to seamlessly interconnect SDI and NDI sources.

NewTek Connect supports audio and video and capture devices from manufacturers that include AJA, Blackmagic Design, DELTACAST, Magewell, Matrox, Teradek, and others, including key and fill pairing on input and output for appropriate video cards; DirectShow devices, webcams, USB3 capture devices, and more. NDI is an IP protocol (so, not file-based). This basically means that you’ll enjoy the freedom of not having to worry about codecs, files and resolutions anymore.

Needless to say, owners of the TriCaster and 3Play products can count on bi-directional built-in NDI support, making the integration with legacy SDI workflows even easier.

A good scenario of a graphics NDI-based workflow is represented by the following scheme:

ClassX applications can discover and connect to any NDI source that will appear as a name in a drop-down list. Every NDI source is handled as a “standard” graphics object (with full alpha channel) and virtually placed into our graphics template Editors’ timelines (CastaliaCG, MoreCG, CoralCG), just like any other object (shapes, texts, clips, pics…)

This makes it possible to create incredible effects and produce eye-catching graphics in real time: CoralCG, our 3D vector Template Editor, for instance, can use NDI sources as live textures to be used for surfacing 3D objects in CoralCG Templates.

NDI sources can also feed 2D/3D PIP (Picture - in - Picture) objects that can be used in ClassX template editors, played in real-time and controlled through LiveBoard.

LiveBoard itself will become an NDI source: customers are able to use NDI just like any other video card and connect the LiveBoard output to any other NDI-enabled application or device.

Last but not least, even if sticking with the SDI input/output philosophy, ClassX Apps can use the NDI technology to parallelly create the long-craved “real preview” showing graphics and live video throughput, namely the final result.

When TriCaster and 3Play are on the same network, they can be used to control LiveBoard: the ClassX NDI implementation allows NewTek users to easily work and play with real-time graphics from one single workstation without operating the external graphics playout. The ClassX Interface delivers the manageability and security that NewTek users need in order to conduct real-time shows with confidence. 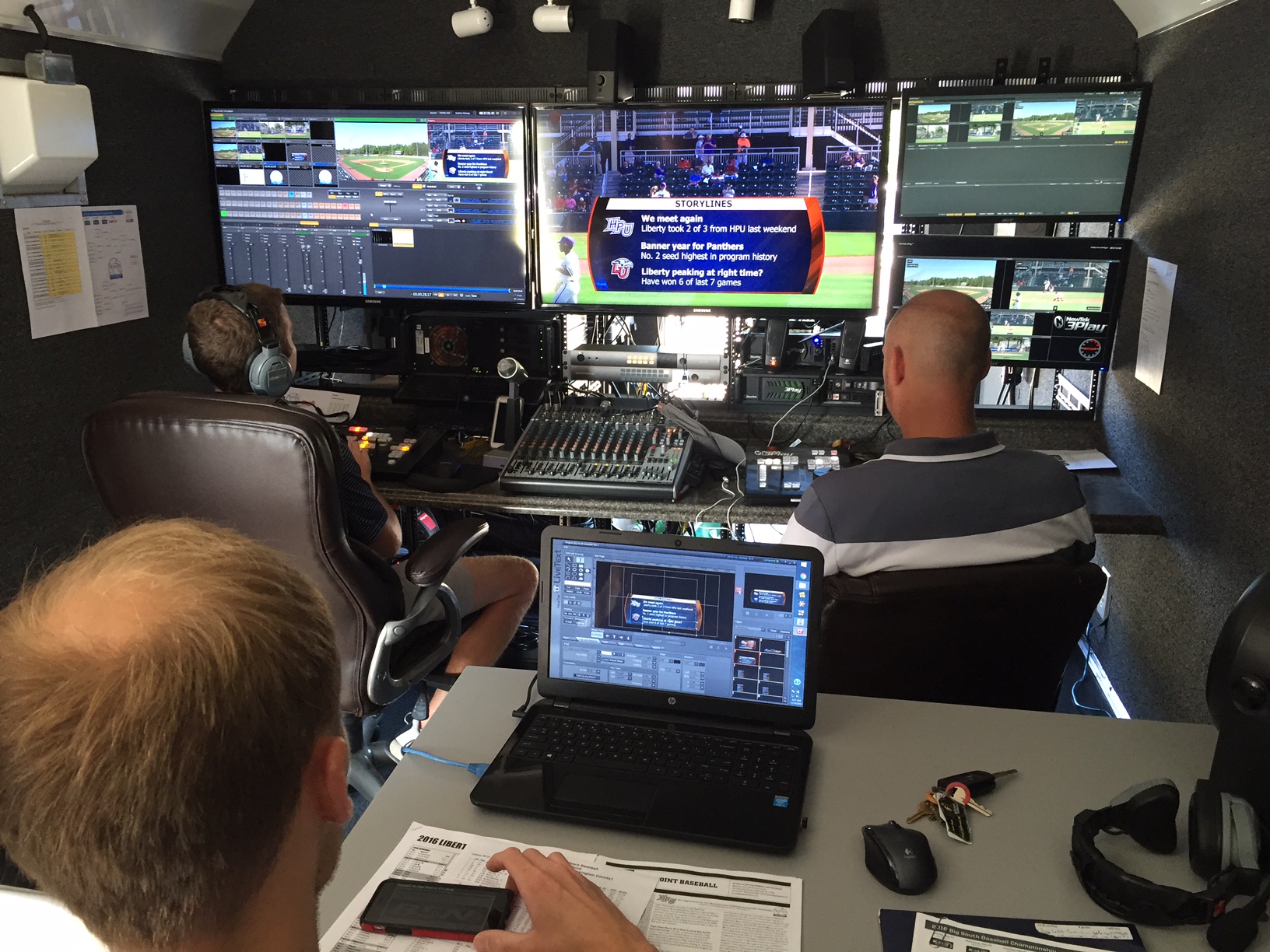