NDI Video Technology Takes On The Most Powerful Women in Marketing

Network-marketing companies like Avon, Mary Kay, and Amway have given women moneymaking opportunities and the chance to be their own boss for years. Some of those women have really found their power and now enjoy a seven-figure income.

The annual *Most Powerful Women in Network Marketing *event provides a fast-paced, high-energy forum where the most successful women in multi-level network marketing share their insights, experiences and advice with thousands of other women looking to gain a foothold in that industry.

During this year’s event, held April 28-30, 2016 at the Mirage Hotel & Casino in Las Vegas, these virtual rock stars of the network-marketing world took to the stage to give motivational talks, supported by videos, photos and slides, to over 3,000 female attendees.

During the 3-day event, while the women were sharing marketing tips and networking with each other, another type of networking—NDI or Network Device Interface (NDI)—was quietly working behind the scenes to enable a live multi-camera webcast that delivered the show to tens of thousands watching online. 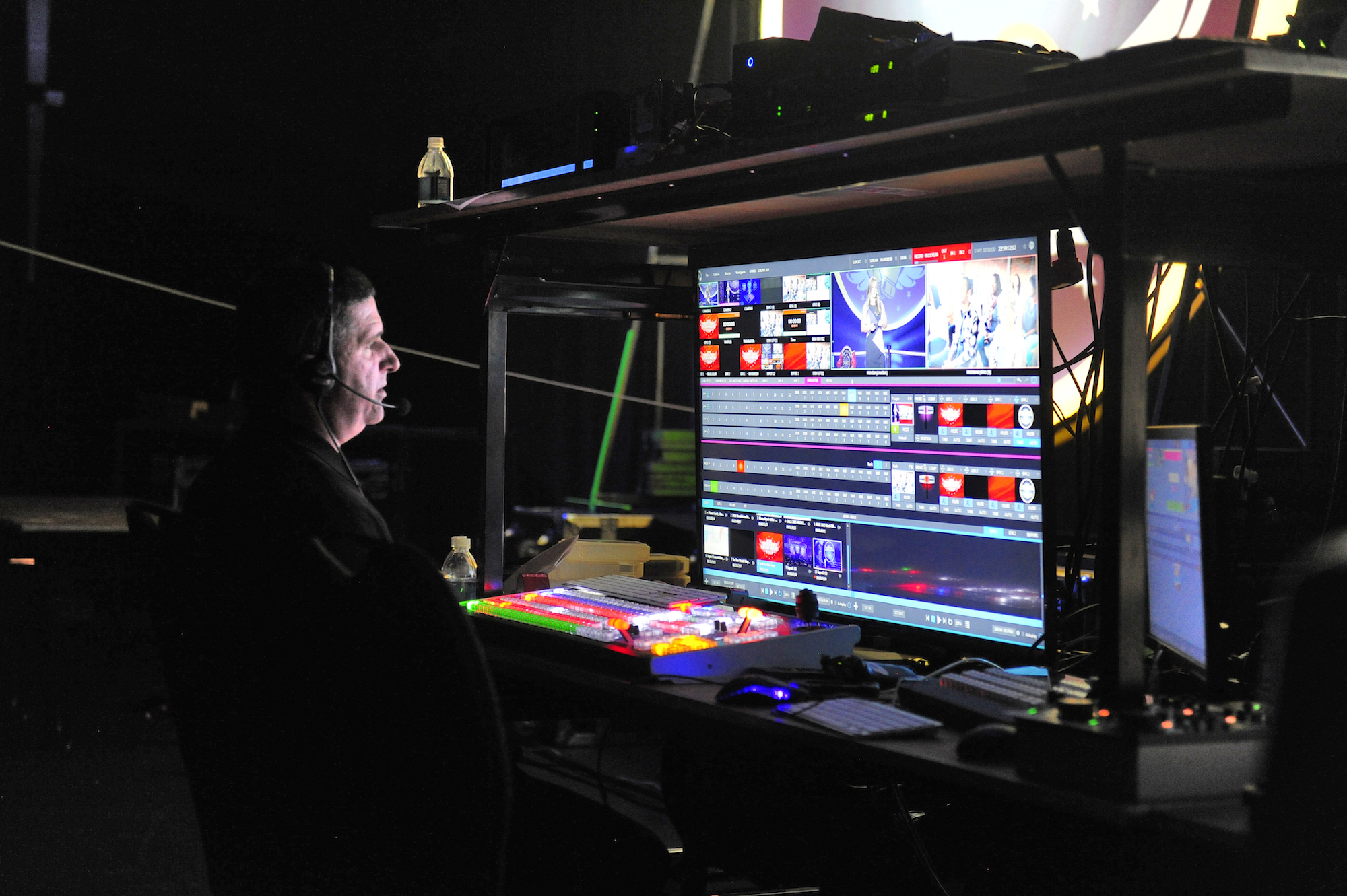 Just one week following NewTek’s U.S. debut of its NDI technology at the 2016 NAB Show, also in Las Vegas, Intuitive Technology Solutions (ITS) jumped right into the NDI deep-end, using this new networking technology as the backbone for this live webcast.

For the past six years, ITS has been providing creative and technical services for the webcast to its client, Cache Media Works, and ultimately, its end client, Network Marketing Pro, the entity that hosts the event.

“Our goal has always been to get the show done well for our client, while lowering the overhead and man-hours involved,” said Brett Beanan, ITS’ Technical Director, who is based in Las Vegas. “To do this, we use the latest media production technologies, such as the NewTek TriCaster integrated production system to produce and stream the event. And this year, because we pushed the envelope further by adding NDI, everything went even smoother and more cost-effectively.”

In reality, using NDI in this live situation was pretty risky since Beanan and his crew had never actually worked with NDI before. He didn’t even know of any previous, real-world NDI implementation that he could look to as a proof of concept for live events.

“The paradigm shift that we’re going to see because of NDI is beyond comprehension. And very few people realize the dramatic turn the video industry is about to take,” Beanan said. “This is like going from horse-drawn carts to automobiles. It’s that big of a step. All because we have an IP-driven workflow that makes both local and remote video production better, faster, cheaper and simpler than ever before.”

While NewTek developed NDI, the company gives the license away for free to any developer that wants to use the downloadable SDK to make their products NDI-capable. And this non-proprietary positioning is spurring adoption of NDI by manufacturers and third party products industry-wide.

Regardless of the type of gear—including cameras, graphics and replay systems—the rich media on these devices can be accessed and switched in real-time, frame accurately, by NDI-networked devices, such as the TriCaster. 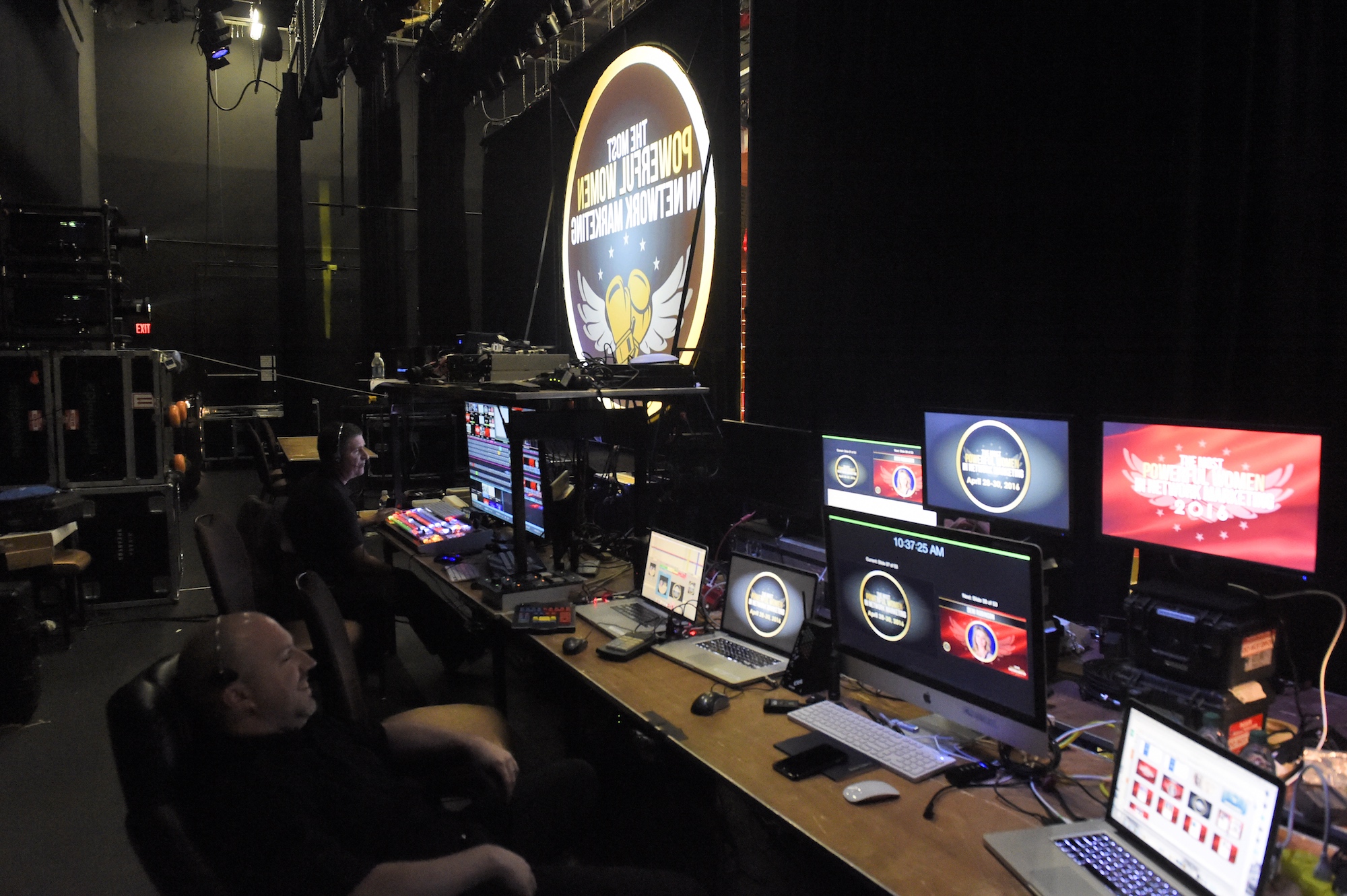 With NDI, relatively inexpensive Cat 5 or Cat 6 wiring takes the place of the more costly, complex SDI/coax that’s long dominated the video industry. And there was no need for any external digital signal converters commonly used on webcasts. This simplified the workflow, eliminated a point of failure and yielded additional savings.

On Wednesday, April 27th, Beanan set up the NDI network in the ballroom of the Mirage where the event would take place the next day and conducted a test. While a garden variety Gig-E switch would have done the job, Beanan chose to use a managed, business-class 24-port Gigabit Ethernet switch from Ubiquity, which ensures a higher-level quality of service as the video packets move over the LAN.

And he was pleasantly surprised by how quickly he got the IP network set up, and how quickly the devices showed up ready to be accessed by the TriCaster. But, he wondered, would it work just as well during the live webcast?

“From the moment we went live,” Beanan said, “The NDI network performed flawlessly and ran without any glitches throughout the entire 3-day event.”

“If anything, it was almost too good because it gave the director so many sources and creative options,” Beanan added. “During set-up day, our TriCaster Operator, Kevin Ferguson, needed a moment to get his head around all the devices he would now be able to use during the show. But he quickly got the hang of it and really enjoyed all the creative possibilities at hand. That’s a good problem to have.”

Besides the NDI network, Beanan had set up a 5 Gigahertz wireless network with five access points for coverage throughout the venue. It enabled wireless devices, such as iPhones and iPads, to become available to the NDI network.

These iOS devices had Sienna’s iCaster software on them (to be able to view NDI sources), and the MacBook Pro Retina laptops had NewTek NDI Connect software (to send NDI content from the FOH position), both of which helped the devices receive and feed rich media assets, such as graphics, to the NDI network. For example, the TriCaster was able to take live video from an iPhone’s camera that someone was using to capture the mayhem as attendees ran through the doors of the ballroom and scrambled for their seats prior to the start of the presentation.

During the three 12-hour-long production days, the webcasts went live for the three-hour sessions that were held in the morning, mid-afternoon, and evening when the presenters were on stage. Between these sessions, the attendees left the ballroom for networking, meals and parties, which were not webcast.

The two Sony cameras were positioned on tripods and outfitted by high-powered box lenses that captured the breadth of the venue, including the large stage and VIP tables in the front of the ballroom, and theater-style seating in the back. The cameras panned and zoomed into shots for visual variety, making it appear that there were more than two cameras at work.

“The signal flow was quite unique and complex,” Beanan said. The presenters’ wireless mics, music and ambient sound all went directly into the TriCaster, over traditional analog, and the TriCaster mixed the NDI audio into a final broadcast mix. It also output the audio to a Yamaha soundboard that in turn fed it to the P/A system.

As the presenters delivered their talks, the images they wanted to show could be transferred from their laptops to the TriCaster over the network, which was essentially an extension of NDI. The TriCaster also provided an output for display on the IMAG big-screen display next to the speakers center-stage, as well as integrated them within the webcast.

Using a digital video effects capability on the TriCaster’s Advanced Edition software, the technical director (TD) composed split-screens and picture-in-picture effects with the presenter in a box on the left and the visual imagery on the right. Also, adopting capabilities of the compositing engine (new to the TriCaster Advanced Edition software), animated movements were created between the two-shots and transitions of full-screen views of the presenter on stage.

“NDI connectivity even benefitted the stage managers and presenters that wanted to know how the show was going while they waited backstage. They could use their iPads and Sienna’s iCaster app to see all of the camera views on the TriCaster’s multiviewer monitor, or click on individual cameras to see them full-screen,” Beanan said. “They could also pull up the speaker’s timer clock display and a show cue-sheet—that we had on Google Docs—without having to interrupt members of the production crew to get that information or waste paper on printed cue sheets. This convenience was only possible because of NDI.”

Beanan has a unique perspective because he’s both an entrepreneur on the cutting edge of using this technology as well as a NewTek Certified Trainer. This position is akin to being a Jedi with special powers. His responsibilities encompass training new TriCaster operators on the West Coast. He can’t wait to introduce others to the NDI revolution.

AutoCue QStart Teleprompter To Connect to TriCaster Via NDI 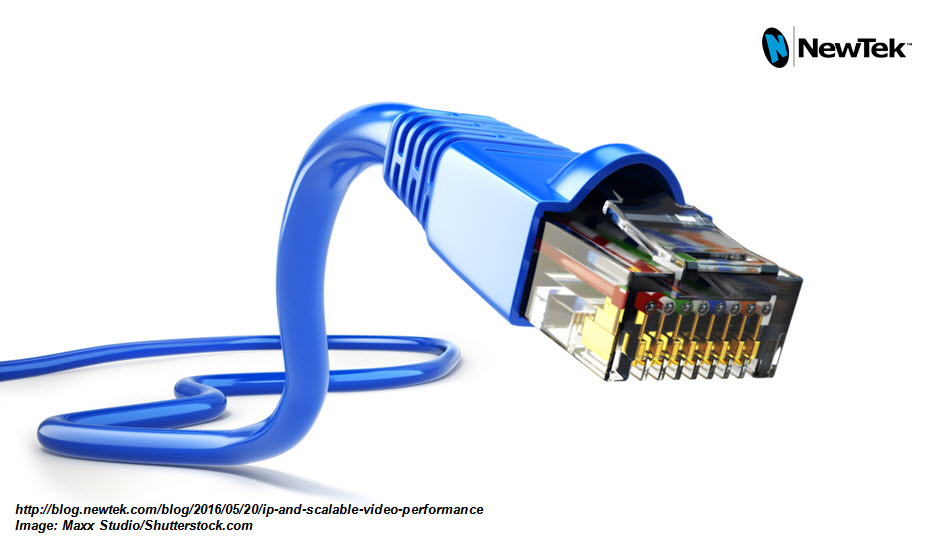