How Mustard TV Makes Great Local Television on a Budget

When the UK government announced plans to facilitate the creation of 23 new city TV stations, they ignited a revolution in how television could become more relevant and engaging to local audiences. The question was: Who would rise to the challenge?

Step forward Norwich’s Mustard TV, a small station with big ambitions. Armed with a minimal staff and budget and the chance to impress 160,000 local viewers, the station now broadcasts over an hour and a half of original content every evening, Monday to Friday.

Watch the video to find out:

How to do more with less… 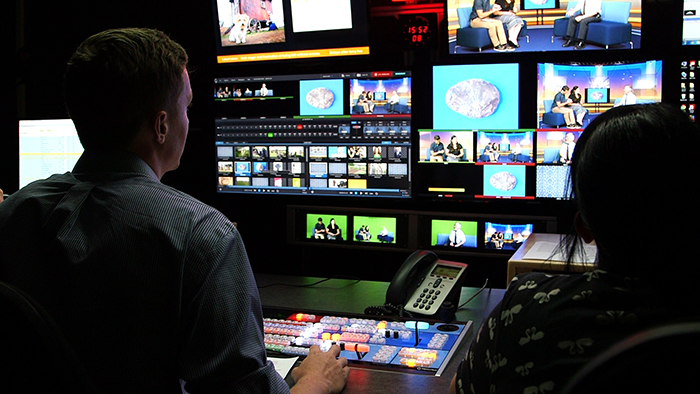 In 2011 the UK Culture Secretary announced a plan to offer local TV licenses around Britain using public spectrum. Archant, one of the UK’s largest independently owned regional media businesses, bid for the license in Norwich in the East of England and won - and Mustard TV was born.

“There have been local TV stations around the world for a long time but never in the UK,” says Fiona Ryder, Managing Director. “We have regional news but the geographical splits are very large, and you don’t necessarily care what’s going on in a town 30 miles away. Local TV is an exciting proposition – it isn’t trying to be a national broadcaster, we believe we have a different objective and that is to engage local people. We’re made by and for the local people of Norwich, and community interaction is a crucial part of what we do.”

Even before the license had been won, plans were being made for the operation of the station. “We planned our infrastructure with some core elements in mind. The workflow technology needed to enable our small production teams to produce high quality TV at a relatively low cost - budget was clearly a big driver in that. We also needed a reliable and robust system to give us confidence that we could always go to air without worrying about the equipment. We also needed a vision mixer capable of supporting green screen sets so that we could optimize our limited studio space,” says Fiona. “I saw the TriCaster 8000 at IBC and was impressed by the scope and scale of its overall functionality - it had a rich and immensely powerful toolset that was easy to use, it could be controlled by one person, and it also had additional features such as real-time social media tools that would enable us to engage with our local audience. I hadn’t seen another system that could do all that in one box, and it was at a price point that made sense for us. All this made the TriCaster 8000 the clear choice.” 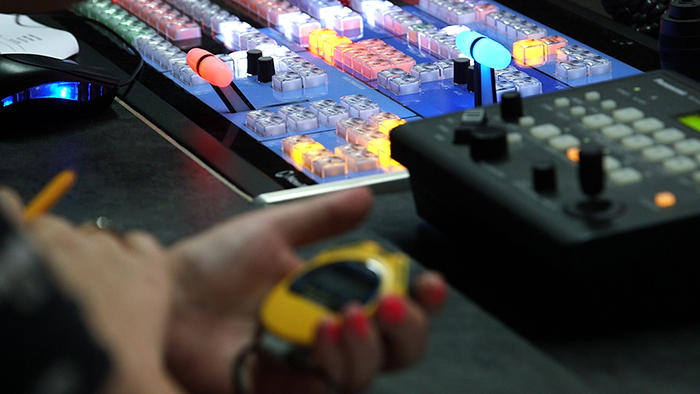 Mustard TV broadcasts digitally to around 160,000 households on Freeview Channel 8, Monday to Friday from 5.30pm-10pm. It features at least an hour and a half of new and original content each day, including local news bulletins, a music show and a magazine program.

The team needed to get up and running quickly to start production and, with such a small staff, multi-tasking was key. Several people have been trained to operate the TriCaster – even though only one or two are required to run each show. “Those on the team that didn’t have prior production experience have found the TriCaster very easy to pick up and within a week or so we have them producing packages,” says Ted Stoltz, Presentation and Scheduling Manager. “I come from a production background where I’ve used other switchers and had multimedia coming in from other sources, but there were always several computers involved and each computer had to have an operator; the TriCaster runs everything seamlessly so you can have one operator take the place of two or three.”

The workflow is simple, with the TriCaster 8000 at the heart of the file-based operation. Remote control cameras in the studio feed into the TriCaster and are mixed live with pre-loaded graphics and effects, edited packages sent directly from the edit suites, pre-recorded shows, and external feeds including Skype, social media feeds and on-location cameras. TriCaster’s Macro Editor also simplifies the operation by allowing users to create macro events for repeated actions, with an assigned button or keystroke to trigger each command.

With a single studio space, Mustard TV turned to green screen technology to enhance the look of the station while saving money. “Our virtual sets give us a lot of flexibility. We can create very professional looking shows without needing to invest a lot of time and money in building and storing multiple sets,” says Ted. “We wanted something unique, so we had a third party company design a number of sets for us as templates, and fed them directly into the TriCaster. The news has its own bespoke design but others are variations on a theme that we can customize quickly and easily with colors and pictures for different shows. It means we can get a lot more use out of our space, and makes it look like we’re a much larger operation than we actually are – people often don’t realize it’s all green screen until they come in and see it!” 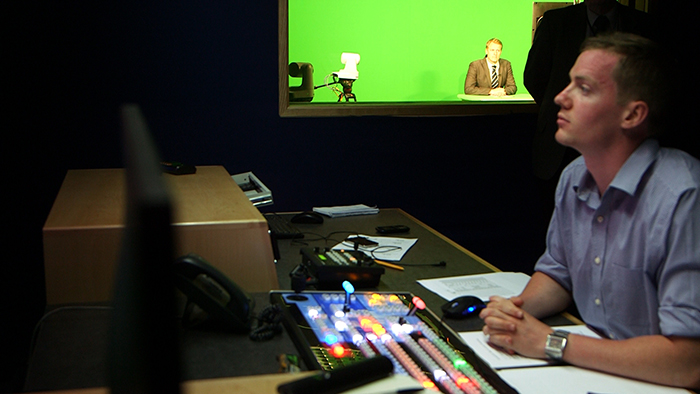 Fiona adds, “Having each show set up on a template means we don’t have to go back and readjust the settings every time from scratch, and if we do need to make a change we can do that extremely quickly.”

With the first few months of successful broadcasting under its belt, Mustard TV is able to look to the future with confidence. “With the building blocks in place we can now consider how to develop the station further, and that’s largely thanks to the confidence we have in our workflow and production capabilities,” says Fiona. “The TriCaster is a hugely exciting piece of technology for this new era of local broadcasting in the UK. It is a powerful and reliable tool that enables us to create highly professional content with an affordable budget, and I think we would struggle to do without it. Of course there are other systems out there, but without the TriCaster we couldn’t do what we are doing with this number of staff and with the budget we have.” 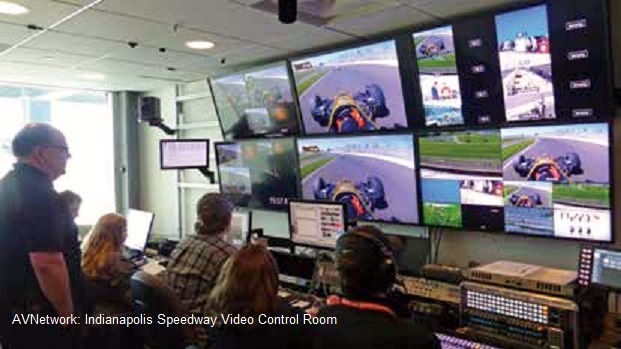 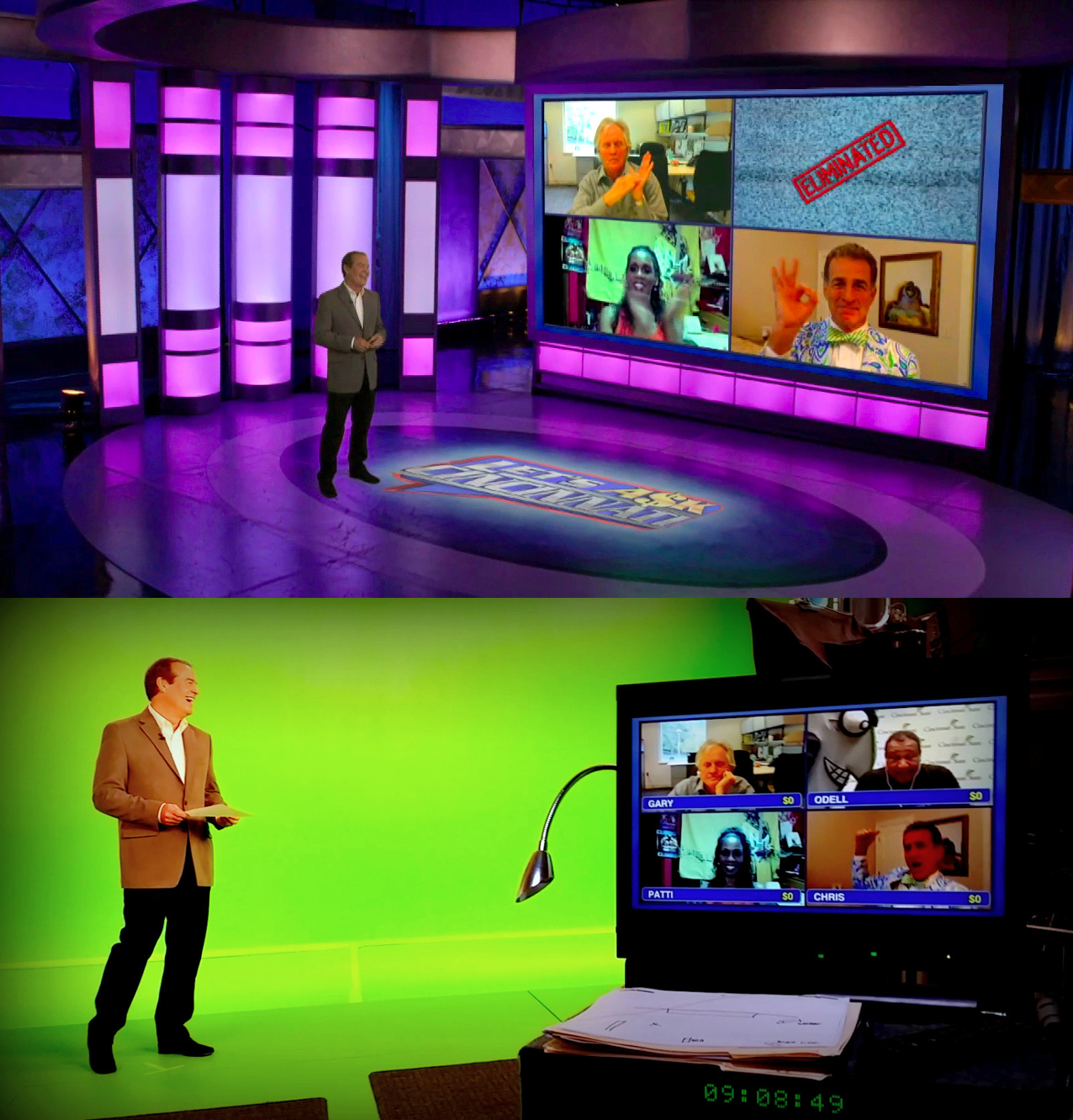 Building a Virtual Studio for an Interactive Game Show